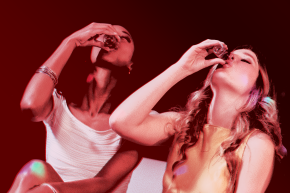 Study: It May Be Bad For Women To Drink Even Before Pregnancy
By Tracy Clark-Flory

Study: It May Be Bad For Women To Drink Even Before Pregnancy

Don’t drink at all. Wait, maybe have a glass of wine a day. Nope, stick with just a couple glasses a week. Actually, don’t even touch alcohol if you might possibly get pregnant. These are the contradictory messages that women have been given for years around drinking and pregnancy. Now, new research — albeit on rats, not humans — throws yet another concern into the mix: the possibility that drinking even before pregnancy might be bad for an eventual, hypothetical fetus.

Researchers from Rutgers University have found that female rats that engaged in binge drinking before becoming pregnant were more likely to have offspring with high blood sugar levels. On Sunday, they presented the as-yet unpublished findings at the annual meeting of the Endocrine Society, according to a press release.

While thousands of studies have reliably demonstrated the potential negative effects of boozing while gestating a human — including low birth weight and serious developmental issues — contradictory recommendations abound. Some studies have found no evidence of harm in moderate drinking, while others underscore that there is no proof of a safe lower limit of alcohol during pregnancy. Last year, the Centers for Disease Control and Prevention took the hardline stance that, essentially, all fertile women should abstain entirely from alcohol, because they might get pregnant.

There is always reason to be wary of drawing too direct a conclusion from rodent-based studies, but this study appears to point to potential dangers of drinking even in pre-pregnancy, based on similar glucose metabolism generally seen in both rats and humans. As researcher Ali Al-Yasari said in a press release, “These findings suggest that [the effects of] a mother’s alcohol misuse before conception may be passed on to her offspring. These changes could have lifelong effects on the offspring’s glucose homeostasis and possibly increase their susceptibility to diabetes.”

Since scientists can’t ask human women to binge drink in a laboratory and then get pregnant, this is why they turned to a group of poor lady rats. The rats were given a “diet” of alcohol for four weeks such that their blood alcohol level was equivalent to that of a heavy-drinking human female. Then the researchers cut alcohol out of their diet and bred them three weeks later, which is equivalent to several months in humans.

The resulting offspring of the boozing rats were tested and compared to those of some sober rodents. The researchers found that the baby rats with hard partying moms had “increased blood glucose levels, decreased insulin levels in the blood and pancreatic tissue, reduced glucagon levels in the blood while being increased in pancreatic tissue, and raised blood levels of leptin.” These changes could increase the later risk of diabetes, the researchers say, but they also underscore that there are some serious unknowns about the effect on the child years later.

As is so often the case with research on pregnancy and alcohol, there are a lot of “coulds,” “mights,” and “mays” here. Pregnant women are left with the burden of that unnerving uncertainty — and they’re not even “allowed” to have a drink about it.