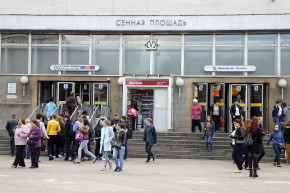 Motivations behind the incidents were not made immediately clear

The entrance to Sennaya Ploschad metro station in St. Petersburg, Russia September 2016 — REUTERS
By Shira Rubin and Gilad Shiloach
Apr 03, 2017 at 8:51 AM ET

ISIS supporters are praising an explosion on a St. Petersburg subway train that has killed at least fourteen people and injured dozens, according to Russian media reports.

“We ask Allah to bless the operation by the lions of the Caliphate, we ask Allah to kill the Crusaders,” said an ISIS supporter from the terror group’s al-Minbar online forum. Others celebrated by saying that the Monday bombs made for “a metro to hell for the worshipers of the Cross” and claimed that the attacks — which are still under investigation by Russian authorities — were revenge for Russia’s backing of Syrian President Bashar al-Assad’s fight against ISIS and other rebel groups in Syria’s civil war. Russian airstrikes and shelling in Syria have killed hundreds of people and reduced entire areas to rubble.

Breaking in the Metro of ST #Petersburg there was an explosion there are victims.#Russia. pic.twitter.com/Gw95a8fp6x

Photos and videos circulating on social media showed injured people lying on the floor outside a train with a gutted door.

BREAKING: Russian media reports say there has been a blast in the St. Petersburg subway system. pic.twitter.com/BMQ5hPdtyz

The explosion occurred on a train traveling between the Sennaya Ploshchad and the Technology Institute stations, both in the center of Russia’s second biggest city. The incident involved a device filled with shrapnel, according to Interfax news agency.

All metro stations in the city have been closed following the blast.

Russian President Vladimir Putin is currently in St. Petersburg and has said that the authorities are looking into all possible motivations, including terrorism.

This is a developing story.