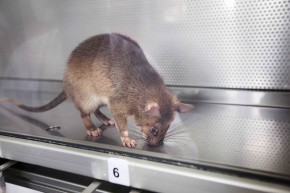 These Rats Can Detect Tuberculosis With Their Noses
By Ethan Harfenist

These Rats Can Detect Tuberculosis With Their Noses

African giant pouched rats have long made headlines for their work sniffing out deadly landmines in developing countries. Lately, however, these special rodents are utilizing their talents for another life-saving cause: detecting tuberculosis. One organization hopes that new research will help the rats gain acceptance in regions of the world where TB is a major problem.

Focusing on parts of East Africa, the Belgian NGO APOPO (an acronym for Anti-Persoonsmijnen Ontmijnende Product Ontwikkeling, or Anti-Personnel Landmines Removal Product Development in English) has deployed dozens of rats to countries such as Ethiopia, Mozambique, and Tanzania, to combat TB. The NGO, which also specializes in training rats to identify landmines, started using rats to detect TB in 2007. The organization has since trained 203 accredited “HeroRATs” — 76 which are used for TB detection, and 127 of which are in landmine discovery.

TB is one of the world’s most deadly infectious diseases. “In 2015, there were an estimated 10.4 million new [incident] TB cases worldwide,” the WHO wrote in its 2016 global tuberculosis report. Around 1.8 million people perish from the disease per year.

APOPO hopes to stop that. Charlie Richter, APOPO’s U.S. director, told Vocativ on Friday that while dogs are traditionally used in the field of TB detection, the special species of rat used by the NGO are very trainable, very sociable, and have a sense of smell comparable to a canine’s.

“The main advantage of a rat over a dog is that particularly in remote scent detection, where you’re bringing samples and running them through in volume in a centralized area, a rat is much more easily acclimated to a lab, they can process hundreds of samples a day much faster than traditional techniques. We take advantage of those core operational advantages of the rats to put it into work and save lives.”

They’re also much more cost-effective, compared to bringing in health experts or using high-tech devices such as the Genexpert Test, a molecular test that diagnoses the disease by identifying TB bacteria. The rats are trained to find TB in samples of sputum, or mucus that’s coughed up from a patient’s respiratory tract due to infection. In terms of performance, Richter says the rats are 70 percent sensitive and 80 percent specific, though unlike machines, rats cannot differentiate between normal and drug-resistant strains of TB.

Securing funding, as well as gaining the acceptance of national TB programs and donors, has been one of APOPO’s biggest hurdles thus far. But Richter says he hopes that new research the organization is undertaking will prove the rats’ abilities and make them a go-to option for people around the world.

APOPO’s research includes a selective breeding program, in which high performers are bred with a combination of domesticated and wild rats. This is thought to help the African rats’ genes express in such a way that they are more accurate in detecting TB. The NGO is also doing something called “early scent exposure” with the rat pups, which essentially trains them early on to “prefer” certain scents and smells. Further, APOPO is working on a more automated cage for the rats in order to make the operation smaller and require less personnel, making it easier to transfer the program to other countries.

“These are things that have been tested and have worked in more traditional lab rats, and think have a very good chance of working with our rats,” Richter told Vocativ.

As of now, APOPO has diagnosed over 10,500 TB patients who were initially missed by their local health systems. And while the rats’ detections still have to be confirmed by more advanced testing at this stage, APOPO wants to make their rats as accurate as possible and possibly expand into other diagnoses, such as cancer.

“The hope is that the rats will become such an accurate tool that they can actually either be a standalone diagnostic, or more realistically, a very, very accurate ‘triage’ [funnel],” Richter said.