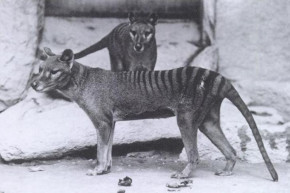 The marsupial is thought to have died out in 1936, but might be lurking in Australian wilderness

The Tasmanian tiger was thought to have gone extinct more than 80 years ago, but now a team of biologists are set to launch a high-tech search aimed to find out whether a few of the creatures might actually have survived.

Also known as the Tasmanian wolf — and more officially called a thylacine — the animal was actually a marsupial, like many of Australia’s most famous mammals. With a wolf-like body, tiger-like stripes, and a kangaroo-like pouch, the thylacine was already rare when European settlers reached Australia. A mix of hunting, disease, and competition from colonists’ dogs drove this shy, nocturnal creature to extinction in the early 20th century, never to be seen again.

Well, maybe not. Reported sightings have trickled in for decades, but it’s only now that scientists have heard sufficiently compelling accounts to launch a formal search. Based on a pair of detailed, believable descriptions from both a long-time park ranger and an experienced outdoorsman, biologists at James Cook University have decided to set up 50 camera traps throughout the remote, largely unspoiled wilderness of mainland Australia’s Cape York Peninsula, located in the far northeast of the country.

The last thylacine died in a Tasmanian zoo September 7, 1936. It was a heartbreaking end for a species: The Great Depression had hit the island particularly hard, and the zoo had had to take on unqualified workers. Unaware of how to care for the animals, zookeepers locked the Tasmanian tiger out of its den, exposing it to extreme temperatures. The species might be worth searching for, if only to rewrite the grim ending to its story.

It’s not unheard of for animals in remote locations to seemingly go extinct and then reappear years, even decades later. Admittedly, most such cases involving mammals are tiny rodents, which are far easier to miss. Probably the closest comparisons to the Tasmanian tiger is Gilbert’s potoroo, a fellow marsupial roughly the size of a rabbit. First catalogued in the 1840s, it went largely unseen until a failed search in the 1970s led naturalists to declare it extinct. It turned back up again in 1994, and there now about 70 of the creatures still alive today.

The search is set to begin in April, and there’s plenty of ground to cover: Cape York Peninsula measures more than 52,000 square miles, roughly the size of Alabama. If it’s possible for an apex predator to hide out for 80 years, this seems as good a place as any.