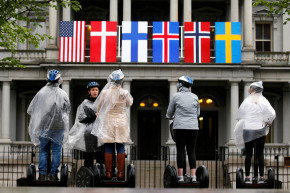 Saturday is April Fool’s Day, a day on which many newspapers around the world loosen their ties by publishing phony headlines and stories to amuse their readers. But with the recent torrent of “fake news,” this fun journalistic tradition is at risk of going the way of the afternoon paper, at least in two Scandinavian countries.

Several papers in Sweden and Norway have already announced their intent to shun April Fool’s Day lest they get wrapped up in fake news controversies.

Magnus Karlsson, the editor-in-chief of the Swedish daily Smalandsposten, said on the paper’s website that since fake news is picked up and shared so easily, he doesn’t want his brand to be tarnished “with a potentially viral and erroneous story,” adding that the publication “work[s] with real news. Even on April 1.”

Other Swedish dailies have also stated their intent to ignore April Fool’s Day this year given the climate of fake news around the world. “Historically, we’ve had super successful April Fool’s jokes,” Ingvar Naslund, editor-in-chief at Vasterbottens-Kuriren, said in a quote translated by Agence France-Presse. “But because of debates and discussions about the media’s credibility being connected to fake news, we didn’t want to do it this year.”

Sweden was embroiled in a fake news scandal in the United States, when Fox News’ Bill O’Reilly interviewed Nils Bildt, a man who was billed by a network chyron as a “Swedish Defense and National Security Advisor.” However, it turned out that Bildt was completely unknown to the Swedish national security community.

AFP points out that Norway media outlets are also shunning the playful tradition. Public broadcaster NRK, as well as newspapers such as Aftenposten and Dagbladet, are refusing to run April Fool’s stories.