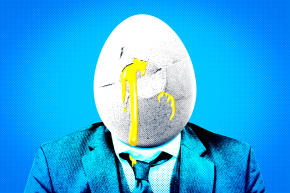 Twitter has killed the last traces of personality it was holding on to. The social network announced Friday that it’s replacing its default “egg” profile photos with generic silhouettes in order to encourage people to actually upload a photo to “prompt more self-expression.”

The egg photo was one of the last original features left from the original Twitter platform. Back in 2010, the egg photo started out as a playful way to reference eggs hatching into birds that send tweets, a cute nod to the company’s name.

However, anonymous egg profiles became more than just a cute reference to tweets. They eventually took on a darker association with trolls who would create impersonalized accounts just to harass others.

Over the years, Twitter has been plagued by its failure to adequately deal with harassment. The issues date back to at least 2013 when it first introduced its “Report Abuse” button after two UK feminists received several rape threats. In recent years, a number of high-profile people and celebrities have left the platform over threats and trolling.

Perhaps Twitter was trying to get rid of the negative connotation the egg image carried, because it stresses in its blog that the new default image has no meaning other than being a placeholder. “For the new default profile photo, we decided that we wanted to use people’s existing expectations for default profile photos and how they serve as a temporary placeholder,” said Twitter’s design team in the company blog.

As expected, many Twitter users are not happy with the new profile photo and are still upset at Twitter’s lack of response toward online harassment.

When we said Twitter Eggs were a problem, we didn’t mean the actual egg itself… https://t.co/ELpvl9RIrw

Users: hey can y'all deal with all of the egg avis harassing people?
Twitter: we know exactly what to do! https://t.co/fuhbptqBEM

Twitter: Don’t worry guys, we took away the egg avatar – the source of all their power!

Twitter hopes the new default “encourages more people to express themselves,” and is “happy to hear your feedback,” but so far, it seems it’s all negative.

Twitter has changed my newbie egg icon into an anonymous guy. Sad.

the egg was the one bit of cute, frivolous personality twitter had left, so congrats to twitter on killing it

This is the second change Twitter has made this week that’s generated negative reaction from its users. On Thursday, it announced that replies no longer count as part of the 140-character limit. Users were complaining the new feature is aesthetically ugly and that it’s harder to keep track of threads. Then again, most changes within the past year have been received with mixed emotions.