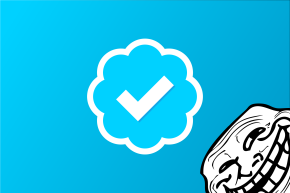 ‘Blue Checkmarks’ Are The New Snowflakes
By Sara Morrison

‘Blue Checkmarks’ Are The New Snowflakes

Social media conservatives have a new insult for liberals who have something most of them do not.

Take heed, prominent liberal Twitter users or just prominent Twitter users perceived to be liberal: your fancy blue checkmarks that denote that coveted verified status are now being used against you.

Yes, “blue checkmark” (or “blue check mark”) is the new “snowflake” — a term of disparagement used by certain right-leaning tweeters. It’s hard to pinpoint exactly when it started and who started it, but “alt-righters” and their kind have increasingly seen the blue checkmark — which Twitter typically awards to accounts it deems to be in the public interest to show that they are authentic — as a badge of liberalness. This idea started to pick up steam after Twitter un-verified Milo Yiannopoulos in late 2015. Yiannopoulos claimed that this was Twitter’s way of censoring conservatives whose political opinions the company disagreed with, going so far as to ask about it at a White House press briefing.

These blue check mark accounts are driving people TO Donald Trump. And they call others morons.

It's alright, Milo. The liberal conspiracy can take your blue checkmark, but we'll always know it's you. It's hard to forget that hair.

If you disagree with blue checkmark guys then they'll bring in their liberal friends who smoke weed and try to embarrass ya.

..then that one time @nero lost his blue check mark…but a liberal's verified @twitter account tweeted this: https://t.co/16vI9xuYds

After President Trump won the election, Twitter cracked down on abusive and racist accounts, many of which belonged to “alt-right” members of his fanbase. Several of “alt-right” founder and white supremacist Richard Spencer’s verified accounts were suspended for several weeks (Spencer’s eponymous account was restored, blue checkmark and all, while two other accounts he managed remain suspended). Twitter also changed its algorithm to make verified accounts more prominent; you may have noticed that seemingly every tweet from President Trump is now accompanied by a series of critical tweet responses from verified accounts. Before, whoever tweeted at Trump first got the first slot. This was almost always a bot selling a mug to hold liberal tears. Now, responses from verified accounts appear at the top of responses to Trump’s tweets. Those responses are almost uniformly critical, which can make it appear as though verified users are resoundingly anti-Trump, and using that status to troll him.

Meanwhile, the accounts that many Trump fans and members of the “alt-right” follow and enjoy have been suspended for what they see as a minor offense. Some of the verified alt-right accounts that survived Twitter’s purge believe that they have been “shadowbanned” — that Twitter is suppressing their tweets or their very accounts in timelines and searches.

The result: blue checkmarks are increasingly seen as a symbol of liberals who Twitter lifts up while pushing right-leaning accounts down. And, therefore, something to use against the checkered elite. You may recognize this strategy from the terms “fake news” and, of course, “snowflake.”

Leftists get blue check marks and conservatives and classical liberals do not b/c Twitter.

What's up with all these blue checkmarks of ppl I've never heard of always being the first reply to any1 on right? And 100% are fake news

@TXScoutMama @Thomasismyuncle some blue checkmarks are trying to compare his decision with sharia law. This is insanity.

This culminated in two recent mentions on Breitbart’s (verified) Twitter account, which will mostly likely only serve to amplify the term.

When you see a Blue Check Mark celebrating how ethnically diverse the wounded bodies in Westminster are pic.twitter.com/Ol6nDNRiX9

Haven't seen much Blue Check Mark outrage about this… https://t.co/NxDQNAeXWw

And it has not escaped the notice of The_Donald subreddit, where all of Trump’s most toxic fans go to play.

Some of the prominent accounts that criticize blue checkmarks are actually members of the club: One of the most vocal blue checkmark detractors is Sean M. Davis, former Republican congressional staffer, co-founder of conservative blog The Federalist, and verified tweeter.

Obama banned refugees from Iraq for six months in 2011. For some reason there was no blue checkmark meltdown then. https://t.co/47jHl181eF

We have no presence at the WH briefing and have never asked a question there, but you do you, blue checkmark. https://t.co/WZKLCyjHJU

A factual discrepancy in a breathless blue checkmark narrative about Trump and Russia? That never happens. https://t.co/d0FHEtORi7

Meanwhile, we also had members of the esteemed blue checkmark media mafia claim Trump really only paid 4% in taxes. https://t.co/7exbm3MlpF

Kinda weird how the blue checkmark crowd forgot to eviscerate @tanehisicoates for fencing off his marriage. Huh. https://t.co/1paqR88uy5 pic.twitter.com/sBUCTV1L3i

The list of blue checkmarks mocking Pence is a murderer's row of hangers-on whose marriages were ruined by alcohol/infidelity.

Vocativ asked Davis how he feels about his own blue checkmark and if he will be asking Twitter to remove the verified status he finds so distasteful in others.

@seanmdav Given the frequency of your insults about blue checkmarks, can I ask how you feel about having one yourself and why you won't give it up?

Davis did not respond.