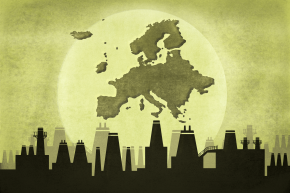 Nobody In Europe Seems All That Serious About Climate Change Either

President Trump is the only head of state on the planet who denies the scientific consensus on global warming. In two months in office, he’s released a budget blueprint that guts climate research, moved to dismantle the Environmental Protection Agency’s Clean Power Plan, and thrown his support behind the Keystone XL and Dakota Access Pipelines, all while threatening to pull the U.S. out of the Paris Climate Agreement. But it would be a mistake to think the rest of the world is necessarily making climate change a priority.

A new report from the environmental group Carbon Market Watch scores the 28 members of the European Union on how committed the countries are to a major climate law intended to cut about a billion tons of carbon emissions by 2030. But a series of loopholes means it’s possible the real reduction in carbon could be less far less than this target —only about 75 million tons.

Using the group’s 100-point scale, just three countries — Sweden, Germany, and France — are even halfway to meeting the requirements of the Paris agreement. Generally, it’s the less wealthy countries of Eastern Europe that rank lowest, though Spain and Italy are also toward the bottom. Poland brings up the rear with just two points, as it not only wants the highest possible starting point in 2021 but wants its emission goal for 2030 reduced.

Loopholes are the reason for such poor progress. Several countries are pushing for a higher starting point in total emissions when the law goes into effect in 2021, which would allow them to cut emissions by less in 2030. Countries can also get credit by planting trees and making other changes to the land. Those do have a benefit, but are much harder to track and make it easier for countries to ignore making more lasting changes in industry or transportation. Other loopholes intended to make the transition more manageable for lower-income countries might be well-intentioned, but they could lead to extra emissions.

That Sweden, the only country that rates as “good” on the scorecard, can only score a 63 suggests just how daunting the task of dealing with global warming really is, considering it plans to cut domestic emissions considerably more than the 40 percent requirement by 2030 and hopes to hit 73 percent reductions by 2040. It largely loses points on the scorecard because it has been insufficiently vocal in advocating other countries adopt similarly aggressive policies. That might not sound entirely fair, but perhaps that’s the point: One small country doing all it can only matters if other countries buy in. That’s especially true now, what with the U.S. looking like it’s going to take a smoke break for the next four or so years.