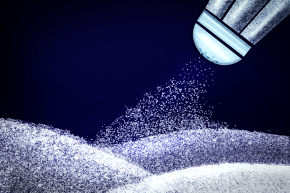 Thank These Foods For Americans’ Sodium Overload
By Ed Cara

America’s salt addiction is real, and it’s mostly coming from these foods, a new report published Thursday by the Centers for Disease and Prevention reveals.

Researchers pored through data from the 2013–2014 version of the National Health and Nutrition Examination Survey, which routinely asks a nationally-representative slice of Americans about their eating and lifestyle habits.

Crunching the numbers, CDC researchers found that the average American over the age of two eats 3,409 milligrams of sodium a day. Just 25 categories of food accounted for 70 percent of that intake, with the top ten making up about 44 percent. Perhaps surprisingly, 60 percent of the sodium we consumed came from foods we purchased at the grocery store, though restaurants and cafeterias had the most sodium-dense foods. Unlisted in the tally was added table salt, which accounts for an estimated about 5 percent of our daily sodium.

There were also subtle differences in where different groups got their sodium from. Tacos and burritos accounted for 8.9 percent of Hispanics’ sodium, but only 3.8 percent of the general public’s; a similar pattern was seen for Asians and rice and soups. Tacos and burritos overall were the only food to have climbed in ranking since 2007-2008, but the change might be more due to a change in how they were classified than an actual rise in popularity.

Regardless of the source, our sodium intake is still much higher than doctors would want it to be. Health agencies have set a target for reducing Americans’ intake to 2,300 milligrams by 2020 — a reduction that might save some 280,000 lives from cardiovascular disease over a 10-year span by reducing overall blood pressure.

But as these findings indicate, there isn’t any one food Americans can cut out of their diet to accomplish a dramatic drop in sodium. Instead, it’ll take changes across the total food supply. So far, though, any attempts to voluntarily budge companies into making their products healthier have been met with big promises but few results. For instance, a study earlier this January found that fast food restaurants enrolled in a program to diversify their kids’ menu items did next to nothing to actually improve the nutritional content of their average meal.