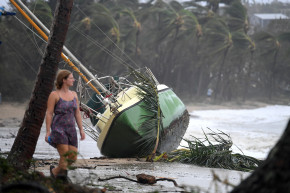 Parts Of Great Barrier Reef May Be ‘Strange Wasteland’ After Storm

Tropical Cyclone Debbie may have brought severe destruction to sections of the reef, which has already suffered damage in recent years

A tropical cyclone that hit northeastern Australia earlier this week may have decimated a portion of the Great Barrier Reef, experts warned on Thursday. The reef, considered the marine equivalent of the Amazon rainforest, has already had a rough couple of years, experiencing its worst-ever bleaching event in 2016.

Tropical Cyclone Debbie hit the country on Tuesday and made landfall near Airlie Beach, Queensland, which acts as a jumping off point for visitors going to the Great Barrier Reef. The Australian Bureau of Meteorology recorded winds at 161 miles per hour, and the storm claimed one life while forcing 25,000 others to evacuate to higher ground.

But in addition to residents and property, the storm has negatively affected fragile coral ecosystems that previously were still relatively healthy, the experts said.

“It basically came through the southern threshold where you get a transition from the severely bleached reefs to healthy reefs, so it’s hit another part of the reef which half-escaped [the mass bleaching] this year,” James Kerry, a marine biologist at James Cook University in Queensland, told Agence France-Presse. “It would have done a lot of damage in the corridor that it came through, perhaps over a range of something like 100 kilometers [60 miles], so quite a substantive area.”

However, while the extent of the damage is not yet known, it could be devastating for parts of the reef.

“The damage can vary a lot from just minor damage, so for example the tips of corals broken off, all the way through to the cyclone picking up really big coral boulders and some of these are three or four meters across…just smashing the reef,” Mark Read, operations manager at the Great Barrier Reef Marine Park Authority, told AFP. “So it almost turns what you would think about a coral reef into this strange wasteland underwater.”

This isn’t the first time the reef has been at the mercy of a tropical storm. According to the GBRMPA, when Cyclone Yasi hit Australia in 2011, a 300 km (186 miles) portion of the reef experienced “serious damage in patches,” while other parts saw no destruction at all.

“About 13 percent of the Great Barrier Reef…was exposed to Yasi’s destructive winds,” the authority said in a statement at the time.