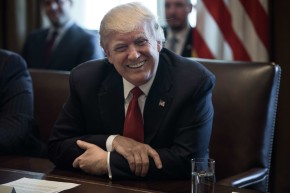 Trump Supporters On Bill That Erodes Internet Privacy: Veto It
By Jeff Andrews

Trump Supporters On Bill That Erodes Internet Privacy: Veto It

Online, some of the president's fans are disillusioned that Trump will side with big corporations

President Donald Trump is soon expected to sign a bill passed by Congress on Tuesday that, among other things, gives internet service providers like Verizon and AT&T the right to sell customers online information. But before he signs, one group that Trump would do well to listen to seems largely opposed to the bill: his own online base of supporters.

A number of online communities that support Trump, most notably the notorious subreddit /r/The_Donald, urged him to veto the bill, with some people reconsidering their support for the President if he doesn’t. A thread about the bill was posted to the top of /r/The_Donald for much of Wednesday. While chatter on the subreddit is usually united in its fawning over Trump, the group had a mini-meltdown as it debated the bill. A few examples:

“I am against anything and anyone that can track and sell my internet browser history,” user Hoffa said in one of the most upvoted comments on the thread.

“It’s taking us in the wrong direction,” said user Jack_Candle. “This is a bad bill. I’m all for the free market but this sort of thing shouldn’t be for sell in the market in the first place. [sic]”

The subreddit /r/conspiracy spent most of the 2016 campaign supporting Trump as a form of opposition to Hillary Clinton. The subreddit trafficked in any number of absurd conspiracies about Clinton, including “Pizzagate,” but they were even more pointed than /r/The_Donald in their criticism of Trump over his support for the bill.

“To all those who think I am still a Trump supporter, just so you all know, I WAS a Trump supporter, but have become extremely disillusioned with him and his administration,” one user posted in a thread about the bill. “We must stand up to him. We must not blindly obey him just because he said he was going to drain the swamp … [sic]”

The backlash from his Reddit supporters over the online privacy bill is the result of yet another confusing signal from Trump about where his loyalties lie. Vetoing the bill would be in line with the brand of populism he preached on the campaign trail, but he’s repeatedly sided with established Republican orthodoxy since taking office, and he’s expected to do so again by signing the bill into law.

And Trump has never met a friend he’s unwilling to turn into an enemy. Despite rising to power with the unwavering support of the House Freedom Caucus, he’s started publicly blaming the group for not getting behind House leader Rep. Paul Ryan’s failed attempt at repealing the Affordable Care Act.

The Freedom Caucus will hurt the entire Republican agenda if they don't get on the team, & fast. We must fight them, & Dems, in 2018!

Democrats loath Trump. The Republican establishment is skeptical of him at best. With his approval rating hitting a new low seemingly every day, Trump can hardly afford to start alienating his core supporters, and yet that appears to be what he’s doing, whether by supporting bills they hate or conspiring with politicians they detest.