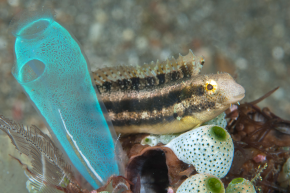 Fish’s Venomous Bite Is Like Heroin
By Alasdair Wilkins

The fang blenny's bite doesn't cause pain in its targets, making it unique in the animal kingdom

In the 1970s, researchers observed something strange when performing feeding experiments on fish. When predators would try to eat an unassuming, four-inch fish known as a fang blenny, soon they would start quivering and reopen their mouth. The little fang blenny would swim out unharmed, and the researchers realized it had actually bitten its predator inside its mouth, shooting a venom into the larger fish that enabled its escape.

Fang blennies are unique in the animal kingdom. Just about every other venomous fish uses a stinger or sharp spines to deliver a toxin to prey. Fang blennies bite their targets, and it’s possibly the only example of a species evolving venom to defend against predators rather than attack. But, as researchers discovered in a new paper published in Current Biology, it’s the nature of the toxin that’s truly bizarre: This is maybe the one venom that doesn’t cause any pain.

“This venom is absolutely unique,” co-author Bryan Fry of the University of Queensland in Australia told Vocativ by email. “We have never seen anything like it.”

The fang blenny’s venom is an opioid like morphine or heroin, essentially a painkiller. But that’s an evolutionary side effect. It apparently also causes a sharp drop in blood pressure for the bitten fish, which would immediately affect its coordination and ability to swim.

“Venom has evolved many times in fish and on each occasion is seems to be associated with pain-causing toxins, except for these blennies,” said co-author Nicholas Casewell of the Liverpool School of Tropical Medicine in the United Kingdom, also via email. “Instead they have evolved a different strategy that leads to the same solution.”

The experience would likely make the predator wary of trying to eat these fish again. That aversion is so strong that other, non-venomous fang blenny species — like the short-head sabretooth blenny pictured above — have evolved so that they mimic the look of their toxic cousins.

This research marks the first time scientists were able to get a big enough sample of the blenny’s venom to genetically sequence some of the biological molecules, known as peptides. It’s intriguing that this new study has revealed what is effectively a previously unknown natural painkiller, though the researchers were cautious about potential medical applications for humans.

Casewell pointed out this precise toxin isn’t so different from previously known opioids found in many other vertebrate species, including humans. They generally wear off too fast to be of much use as a medicine.

Still, Fry did say that further study could reveal a longer-lasting version, but there’s no way to know without further study. This wouldn’t be possible without protecting its habitat: Australia’s world-famous Great Barrier Reef, which is currently dying because of the effects of climate change.

“This discovery is an excellent example as to why we must urgently protect all of nature. It is impossible to predict where the next wonder drug will come from,” he said. “Destroying the reef is no different than popping a nuclear bomb on top of an oil field. It is the willful destruction of a vast economic resource.”