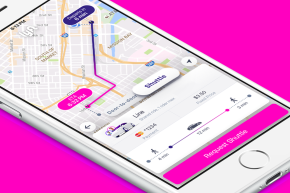 What Lyft Has Been Doing During Uber’s PR Crisis

Uber is having a problematic year with scandal after scandal, but while everyone is focusing on Uber, its competitor Lyft has been taking advantage of the PR crisis by rolling out new features and stealing clientele.

The ride share service has made several announcements over the past month that show its attempts to benefit from Uber’s scandals, both by attracting new users and attempting to appear like a more ethical alternative.

For example, over the past three months, Lyft has worked to increase its reach across the U.S. The ride share is now available in more than 131 cities, which has lead to 37 million new users, the company said. It has also released new features such as allowing third-party companies to integrate Lyft into their apps and browsers, as well as a charity system that lets riders round up their fares to donate money to non-profit organizations. The company also pledged to donate $1 million to the American Civil Liberties Union.

The latest announcement was this week, with Lyft debuting a new type of commuter ride sharing option called Shuttle, which allows passengers to get on a car that operates along a set route with specific pickup and drop-off locations — like a public bus. However, Shuttle is currently only an experiment and it’s being tested in San Francisco and Chicago only.

Lyft, however, doesn’t deserve too much credit for being an alternative to Uber, which people abandoned for its workplace harassment scandal and associating with Trump when he first took office, among other reasons. Lyft essentially has the same business model as Uber, which is criticized for retaining drivers as contractors not employees and treating them poorly. Lyft’s president John Zimmer has said it himself.

In that same interview, Zimmer went as far as calling the company “woke,” which would mean that it’s aware of social injustice and expressing commitment to stop it. The donations Lyft has made to the ACLU defend that statement. However, the company is not “woke” when it comes to distancing itself from Trump since people like Peter Thiel are both major investors in Lyft and players in Trumps administration. Additionally, Lyft has refused to release it’s diversity numbers — which Uber released this week.

With all the new features, new cities, and passengers who deleted Uber late January, Lyft managed to surge after Uber’s bad publicity. Lyft’s market share went up from 16.5 percent to 20.9 percent after the #DeleteUber hashtag began to trend and then went up again to 21.3 percent after the Susan Fowler story, according TXN Solutions, which tracks debit and credit card spending.

However, Zimmer told TIME that the company currently has 40 percent of the market share in multiple cities in the U.S. Regardless of the percentage, Lyft remains No. 2.