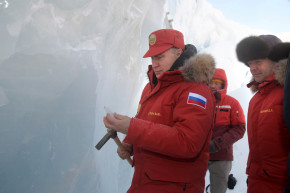 March 30 marks the 150th anniversary of the sale of Alaska from the Russians to the U.S.

Russian President Vladimir Putin and Prime Minister Dmitry Medvedev in the Arctic — REUTERS
By Shira Rubin with Tanya Bekker
Mar 30, 2017 at 8:08 AM ET

It’s been a 150 years since Russia handed Alaska to the U.S. and many Russians say they want it back. Emboldened by the annexation of Crimea, Russians are feeling expansive towards territory they feel some sense of ownership over, and online, they’re marking the March 30 anniversary with efforts to debunk ‘myths’ of the 150-year-old sale.

Translation: “America, give back Alaska,” above an illustration of Americans signing the purchase of the state of Alaska from Russia.

A hit song in the 1990s by Russian pop group “Lyube” entitled “Do Not Fool with Us, America!” goes, “The czars were wrong! Russia and Alaska are two banks of the same river! Give back our dear land, dear Alaska, give it back to us!” In the music video, Russia takes Alaska back from the U.S. at gunpoint.

Russia has long mourned the cessation of Alaska signed on March 30, 1867. The “loss” is taught in Russian history classes, with some textbooks referring to the transaction as a deal gone wrong.

Translation:  “We have returned to Crimea, we will return to Alaska,” featuring a photo of Russian President Vladimir Putin riding bare-chested on horse ahead of French president Francois Hollande and German chancellor Angela Merkel.

Last year an eighth grade history teacher, Tatyana Vankom, wrote a letter to the Education Minister Dmitry Livanov insisting there was a mistake in Russian textbooks that said Russia only rented Alaska to the United States, never intending for the arrangement to be permanent. The ministry responded that it would update the books. It added there would be no penalty for students who in exams wrote that Alaska was rented, rather than sold to the United States.

For years, Russia has delicately pursued an neo-imperial expansionist foreign policy, frequently referring to the former glory of the USSR. Russian President Vladimir Putin’s annexation of Crimea in 2014 and aggression in eastern Ukraine caused many observers to wonder if Putin had plans for recapturing other former Soviet neighbors.

The government has been decidedly less confrontational in regards to U.S. territory, though it has erected a monument in Crimea that reads, “WE HAVE RETURNED CRIMEA, YOU ARE TO RETURN ALASKA,” with the engraved silhouettes of both Crimea and Alaska.

Page of "United Russia in Crimea" news site on VKontakte

Russia has for years now had its sights on the northern parts of the Arctic currently populated by polar bears, walruses, seals and the occasional explorer. Russia has oil drilling projects in offshore fields located in the Pechora Sea, south of Novaya Zemlya.

But as oil-rich region loses large portions of its polar ice due to global warming, Russia, as well as the United States, Canada, Denmark and Norway have increasingly focused on developing the area. Russia has not responded to concerns posited by advocacy groups like Greenpeace over development in the Arctic’s extreme climates, arguing that an oil spill in the region would be catastrophic and difficult to control.

“Natural resources, which are of paramount importance for the Russian economy, are concentrated in this region,” said Putin as he toured the Arctic archipelago Wednesday in order to reinstate Russia’s claims to the area. Putin is taking part this week in an international conference on Arctic development hosted by Russia.

Putin urged his defense ministry to ensure the “defense of [Russia’s] interests in the Arctic.”