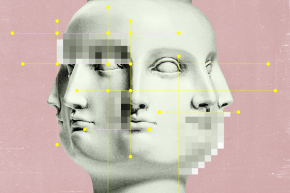 Both our eyes and computers can be routinely fooled by a new kind of photo ID fraud, a recent study published this month in the journal PLOS One finds.

Taking two people’s faces that were similar in appearance, UK researchers at the University of York created a series of photographs that steadily combined the features of both. On one end was person A’s unaltered face, on the other, person B’s, and right in the middle was a photo that was morphed to have features split evenly between them. They then placed these images inside a mock passport.

A small group of volunteers, role-playing as airport passport inspectors, had to decide whether the photo was genuine compared to an unaltered image. The researchers also put the passport to the test against facial recognition software found on a typical smartphone.

Could you tell the difference?

The less morphed the passport photo, the more people said it matched the unaltered image they were given to compare against. But even when the photo was 50/50 morphed, the majority, 68 percent, still bought it as the real deal. The facial recognition program did better, but it still accepted the 50/50 morphed photo as real one-fourth of the time.

“An acceptance rate of 68 percent suggests that this type of image, when used as fraudulent ID, might sometimes serve the purpose of providing acceptable documentation for two different people,” the researchers wrote.

The findings reinforce how easy it is to fool unsuspecting marks in general, according to Mike Burton, study senior author and University of York psychologist. But they also suggest this new kind of fake ID could be better at doing so.

“People are surprisingly bad at detecting fake IDs,” he told Vocativ in an email. “It turns out that matching two faces is a very difficult task — people are much worse at this than they think. Even trained professionals.”

Indeed, earlier research by Burton and his colleagues showed that passport officers and students gave the all-clear to fake IDs at the same rate, roughly 20 percent of the time, even among those most experienced.

These previous experiments studied the traditional sort of fake ID, which simply uses the undoctored photo of someone who looks like you. According to the researchers, morphed facial IDs are a relatively new form of fraud that have started to pop up in recent years. As of yet, though, there’s no publicly available information on how commonly they’re being used.

Fortunately, there do seem to be ways we can buff up our BS meters. Burton’s team ran a second experiment with another group of volunteers, this time telling them beforehand that the passport images may have been manipulated. With that nugget of doubt implanted, only 21 percent fell for the 50/50 morphed photos.

On the other hand, the type of facial morphing the researchers used was admittedly simple, and often produced image artifacts that could have made detecting a fake easier. With sophisticated photo-editing technology, it’s certainly possible these fake IDs could become even more unnoticeable to the human and computer eye.