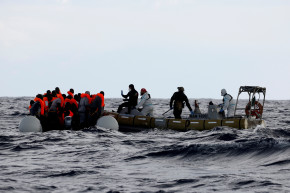 All but one of 147 migrants on a boat that sank in the Mediterranean drowned while trying to reach Italy from North Africa, the International Organization for Migration (IOM) said Wednesday.

According to Reuters, a Spanish naval vessel found the only survivor, a 16-year-old Gambian boy, clinging to a piece of wreckage on Tuesday. He was then handed over to the Italian Coast Guard which brought him to Lampedusa, a Sicilian island in the Mediterranean.

“He was very tired when they found him. He’s resting now, so we’ll have more details later,” IOM spokesman Flavio Di Giacomo told Reuters on Wednesday. “The boy said they left Sabratha, Libya, a couple days ago on a rubber boat with 147 sub-Saharan Africans on board, including five children and some pregnant women.”

The IOM reported on Tuesday that 26,589 migrants and refugees have entered Europe by sea this year through March 26 — with over 80 percent of those arriving in Italy. Further, the organization has recorded 649 deaths in the Mediterranean in 2017.

On Wednesday, Italy’s parliament passed a law to bolster support and protection for unaccompanied minors. The move was lauded by humanitarian groups.

“This new law serves now only to give refugee and migrant children a sense of predictability in their uncertain lives after risking so much to get to Europe — it serves as a model for how other European countries could put in place a legislative framework that supports protection,” Afshan Khan, UNICEF regional director and special coordinator for the Refugee and Migrant Crisis in Europe, said in a statement.