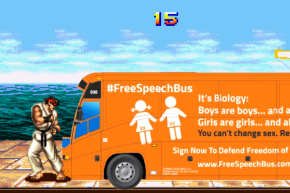 Inspired by Street Fighter, your avatar can battle hate without worrying about vandalism charges

A so-called “Free Speech Bus” relaying anti-transgender messages and spreading biological misinformation is currently touring the U.S., and many people are not happy about it. The bright orange bus, which bears the words, “It’s Biology: Boys are boys…and always will be. Girls are Girls…and always will be. You can’t change sex. Respect all,” is currently on a publicity campaign against U.S. states’ legalization of transgender protections — and facing pushback.

While parked in New York City last week, the bus was vandalized with broken windows and the spray-painted words “Trans Liberation.” NYPD is reportedly investigating the matter.

While the vandalism only resulted in a temporary setback for the bus (funded by anti-LGBTQ groups the National Organization for Marriage and the International Organization for the Family), California-based independent game developer “Aquma” released a simple computer game that allows players to vent their rage in the virtual world.

Modeled after Street Fighter II as a “fan work of political satire,” the web browser game (which he calls a “game snack) “Ignorance Fighter II” replicates the 1991 arcade game’s bonus stage and requires players use simple controls to punch and kick the bus so that the windows fall out and the tires come loose. Upon winning the game (which is exceptionally easy to do), the game flashes the message “Go rethink your bigoted beliefs. Gender identity is separate from biological sex.”

Aquma, who says a tweet inspired him to create the game, told Vocativ that he immediately recognized images of the bus he saw on social media as “a way for malicious actors to promote a discriminating agenda by oversimplifying the issue.”

Though he toyed with the idea of having street fighters of all genders take on the bus, Aquma ended up choosing the male character Ryu for the sake of time.

“When I thought about it, [cisgender and heterosexual] men really need to do their part as allies, if they really care about these issues, to fight against discrimination in all forms,” he told Vocativ in a Twitter message. “So that’s why Ryu is stepping up and not dragging his (bare) feet behind women of color like Chun Li or transgender women like Poison, expecting them to lead the resistance,” he said, citing other classic Street Fighter characters.

Offline, the Free Speech Bus has been repaired and is headed for Boston, MA; New Haven, CT; Philadelphia, PA; Baltimore, MD; and Washington, DC, where LGBTQ activists await it.