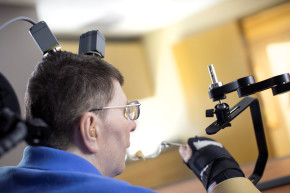 Experimental neuro-prosthesis reconnects a patient's brain to his arm muscles

A man who has spent the last eight years of his life paralyzed from the shoulder down has been able to use his arm to feed himself again — thanks to an experimental technology seemingly ripped out of the pages of the latest Marvel comic.

Nearly three years ago, a team of researchers at the Case Western Reserve University in Ohio recruited 56-year-old Bill Kochevar, who suffered a severe spinal cord injury while cycling, to test out a “neuro-prosthesis” that would partially restore the connection between his brain and muscles. Over the course of a year, Kochevar was outfitted with an implant and electrodes in his brain and arm, respectively, and underwent training to familiarize himself with the prosthesis and strengthen his arm muscles. As of early 2016, Kochevar has been able to reach out, grasp and drink a mug of coffee in the lab by simply thinking about it; and more recently, he’s been able to feed himself with a spoon.

The team’s research on Kochevar was published Tuesday in The Lancet.

“Our research is at an early stage, but we believe that this neuro-prosthesis could offer individuals with paralysis the possibility of regaining arm and hand functions to perform day-to-day activities, offering them greater independence,” said lead author of the study, Dr. Bolu Ajiboye, in a statement.

Kochevar’s prosthesis is actually a combination of two already existing technologies. The electrodes in his arm are an example of a functional electrical stimulation system (FES), while the implant is a type of brain-computer interface. Scientists have used FES to allow people to move paralyzed muscles on command, usually via an unaffected body motion, such as using puffs of exhaled air to move a leg. Brain-computer interfaces, in turn, use pirated brain signals to operate devices and perform functions, like typing out words on a screen and playing a video game, or even restoring a rudimentary kind of vision. Kochever’s training involved using his implant device to move his arm in virtual reality.

The innovation researchers have explored in recent years is using the signals taken from an implant device to use a FES system, effectively mimicking how the brain communicates with the rest of the body.

In Kochevar’s case, the researchers rigged up a decoder that translates his signals, his very thoughts, into commands sent to the 36 electrodes along his arm. Elsewhere, researchers have used such systems to restore a person’s ability to walk. The implant used in Kochevar, called the BrainGate2 Neural Interface System, is also being tested by others to see if they can help quadriplegics to operate assistive devices and even communicate via email with their thoughts.

For the time being, Kochevar’s remarkable progress is merely a proof-of-concept. The motions of his arm are rougher, more imperfect, and slower than what humans usually achieve. Unlike everyone else, Kochevar also needs to see his arm in order to accurately move it, since his brain is still unable to sense where the body is in space. More importantly, Kochever can’t use the device outside a specialized lab at the Louis Stokes Cleveland VA Medical Center, which also collaborated on the research.

With advances in engineering, computing, and battery technology, though, those like Kochevar may be able to someday circumvent their paralysis entirely.