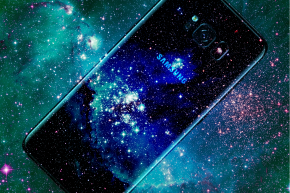 Samsung’s Galaxy S8 Unlocks With Your Face
By Alejandro Alba

It has encrypted facial and iris recognition features to unlock, login, and pay

Samsung is hoping you’ll forget about the explosive Galaxy Note 7 with the upcoming Galaxy S8. The South Korean company unveiled its latest smartphone Wednesday, and it has features that it hopes will distract you from the terrible year Samsung has had.

The new S8 models will have a new voice assistant called Bixby, a bigger edge-to-edge screen (5.8-inch on the S8 and 6.2-inch on the S8 plus), and it will not explode — hopefully— since the company is following a new battery protocol that calls for an eight-point safety check.

One thing that stands out is the smartphone’s encrypted biometric features. It uses both facial recognition and iris scanning to let users unlock their phones by simply looking at it. Eventually those features will also work with banking, the company said, using Samsung Pay and logging into other apps.

Samsung has already used biometrics in its phones — the Note 7 had iris and fingerprint scanning — but this is the first Samsung smartphone that encrypts that data to make users feel safer about scanning their face. Samsung claims that these features have “defense-grade security that stands guard around the clock.” The irises in users’ eyes are unique and virtually impossible to replicate, which is generally thought to be safer than using a passcode.

More Iris Scanners Are Coming To Phones, But Are They Safe?

Although Samsung claims the device’s use of biometrics is very secure, it might still raise some questions for customers. Samsung did not provide many details, and customers unfamiliar with its features my have concerns. For example, would police authorities be able to force people to unlock their phones by using their face, finger print, or iris? It’s unclear, but biometrics on phones is beginning to start a new conversation about mobile security and digital rights.

Some of the other S8 features had been leaked ahead of this week’s event, but some of them were just rumors. Unlike the iPhone 7, the S8 models will continue to have a 3.5 mm audio jack and a microSD slot to expand memory. Those were two things rumored to be removed.

However, Samsung did remove the home button from screen and replaced with a touch sensor. It also moved the fingerprint scanner to the back of the phone. It is rumored that Apple will do the same with the iPhone 8, which is expected to be unveiled in September. The S8 will also be able to double as computer with its 10 nanometer processor and connect to any desktop screen.

The S8 and S8 plus will go on sale April 21, but pricing has yet to be revealed. It’ll be interesting to see how the new models perform and if Samsung owners are still loyal to the brand. According to a new survey from ReportLinker, 90 percent of customers still trust Samsung despite the Note 7 crisis, but losing 10 percent of your customers is still a pretty big deal.