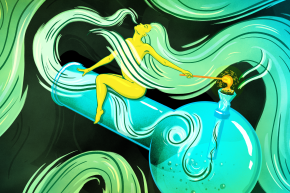 She inhales deeply — or takes a “rip,” as the accompanying hashtag, “#bongrips,” suggests — and blows a cloud of smoke into the camera. “So nice smoking girl,” comments a fan. One guy chimes in predictably, “Lucky bong!” Another, perhaps too stoned to recognize the absurdity, suggests, “Let’s get high sometime!” The video has over 42,000 views.

It’s one of several posts the award-winning performer has made that sensually announce her love for Mary J. In another video captioned, “Wake n bake,” she lights a blunt, lets smoke billow out of her lips, and pulls her pink leopard print robe to the side. She’s also posted photos of marijuana packed tightly into a glass pipe and an array of edibles along with a shoutout to her weed dispensary of choice.

More Weed Industry Under Trump Could Go Up In Smoke

Vicki Chase, a 32-year-old performer, occasionally posts to social media about weed and, for her, it’s a form of personal branding. “I think it makes you more relatable,” she said. “I like that, because I’m a very normal person and I just want to show that it’s something I’m down with, and obviously if you’re down, that’s something we have in common.” She’s noticed a recent boom in porn stars Instagramming and Snapping themselves smoking weed — “it’s all about that,” she said — and actually feels like she’s too “chillax” about her weed-related social media strategy and should be posting more videos of her “sexy 420 sessions.” “It’s generating more fans, so it’s smart for your business,” she said.

Layla Price, a 25-year-old performer, has her very own strain of branded weed through Natural Cannabis Co., and often shares videos of herself smoking on social media — a recent clip shows her taking a hit, along with the text “Stay smokin” followed by an “OK” sign. Whenever she does, Price says she gets fans asking where she got the weed, which tees up a nice marketing opportunity, or telling her how hot she looks. Like Chase, she sees it as a relatable marketing strategy. “For the fans there’s nothing hotter than one of your favorite porn stars smoking a blunt and going, ‘Holy shit, she likes what I like,'” she said.

Of course, there’s also the fact that plenty of people see weed as something of an aphrodisiac. As Chase puts it, “In my private life, I love to be high and I feel like I can take my sexual experience on a whole ‘nother level.” Keisha Grey, a 22-year-old performer who appears in an episode of “Wake and Bake” and has a weed leaf tattooed on her middle-finger, agrees. “When I first started dabbling in different mediums of marijuana I associated it with experimenting sexually,” she said. “My boyfriend and I used to smoke joints and then try different things that felt amazing. I think that marijuana heightens things sexually and makes people very horny.”

Clearly, the creators behind the new porn site Emerald Triangle Girls, which officially launches next month, agree. Fivestar, one of the site’s directors, describes the niche as “girl-girl weed fetish.” “For me, the aesthetics is really sexy — you have smoke, that always looks really great on camera, and then you have beautiful women,” she said, although she doesn’t let her performers smoke real weed because she wants everyone to be sober and fully capable of giving sexual consent. “There’s something seductive about a hot woman with lipstick inhaling smoke, it going into her mouth, drawing it into her body, and then exhaling.”

This is all happening at the same time that women’s place in marijuana culture has shifted — once, they were seen largely as “booth babes” at marijuana conferences and hawking wares in weed-printed bikinis, now they are highly visible as the CEOs of bougie dispensaries and a potentially lucrative target audience. A couple years ago, Dan Skye, editor-in-chief of High Times, reported that the magazine’s longtime approach of featuring scantily clad women on its covers wasn’t working any more. “Maybe it’s because we’re a niche magazine, and our audience demands we focus down on cannabis and cultivation and cannabis issues,” he told New York Magazine. Or, maybe, it’s time to leave the porny pot content to the experts.