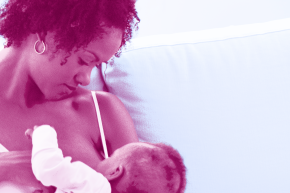 The debate continues, this time with a study finding that breast fed children are no more intelligent than kids who aren’t breast fed

The benefits of breast feeding have been well established — from protecting against infections to lowering the risk of Sudden Infant Death Syndrome. But a new study raises doubts about one of the most contentious of those alleged benefits: intelligence. Researchers from the University College Dublin have found that breast feeding doesn’t have any long-term impact on children’s cognitive abilities.

The study, published in the journal Pediatrics, used longitudinal data on 8,000 children in Ireland. Initially, the researchers found the breast-fed children scored better on cognitive development. But when they controlled for other outside factors, the breast feeding advantage disappeared. At the age of three, children who were breast fed for at least six months showed no statistically significant differences when it came to cognitive abilities. This seems to contradict prior research finding higher IQs among elementary age children who were breast-fed.

The current study did find one notable benefit: at age three, breast-fed kids were less hyperactive — but that advantage disappeared by age five.

“The belief that babies who are breast fed have advantages in their cognitive development, in particular, has been a topic of debate for over a century now. What needs to be emphasized here is the notion of causality,” said lead researcher Lisa-Christine Girard in an email. “Babies who are breast fed do tend to score higher on measures of their cognitive ability over time, yet this may, in large part, be the result of other factors that are associated with maternal selection into breast feeding.”

One such factor is education — mothers who breastfeed tend to have higher levels of education. Unless you control for such things, as the current study does, it’s hard to identify cause and effect. “Our results would suggest that breast feeding per se, may not be the causal factor responsible for ‘smarter kids,’ although it may be associated via maternal and family characteristics,” said Girard.

This study will no doubt re-fuel the breast feeding debate — which, let’s be honest, is never for lack of kindling — but it doesn’t fundamentally change what we know about the overall benefits. It just complicates the picture when it comes to intelligence, and that certainly won’t do anything to change the American Academy of Pediatrics’ recommendations that mothers breastfeed exclusively for the first six months. As Girard said, “For mothers who are able, breast feeding provides a wealth of documented benefits to both mother and babies and it is important to emphasize that our findings regarding cognitive development in particular in no way take away from that.”