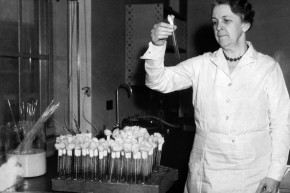 Is The Aging Scientific Workforce A Problem For Discovery?
By Alasdair Wilkins

Is The Aging Scientific Workforce A Problem For Discovery?

Scientific genius is thought of as the domain of youthful genius, but that might be overstated

America is getting older, which means people aren’t just living but also working longer. Scientists aren’t immune from this trend, as a new study suggests the number of scientists working into their 60s and 70s has doubled since 1993. When earth-shattering scientific discoveries are often thought of as the domain of young geniuses in the early days of their careers, is it a problem that scientists are aging?

The classic quote here is one commonly attributed to Albert Einstein — though, like a lot of famous scientist quotes, the oldest source is still only secondhand — in which he supposedly said, “A person who has not made his great contribution to science before the age of 30 will never do so.” While that might have been accurate for iconic figures like Einstein and Isaac Newton, more recent research indicates the cutoff isn’t as extreme, though age does matter: The most productive age for scientists appears to be their mid or late 30s, according to various studies.

Still, study co-author Bruce Weinberg doesn’t see too much cause for concern. “Work that I have done along with others suggests that Einstein’s famous quote (and he’s not the only one to have said that sort of thing) is less true today than it was at the time,” he told Vocativ in an email. “Even back then, it was more true in physics than in other disciplines. The data show that in many fields researchers are frequently highly productive and creative long into their careers.”

Weinberg and collaborator David Blau’s research, published in the Proceedings of the National Academy of Science, finds that the average age of scientists in the U.S. workforce has increased from 45.1 years old in 1993 to 48.6 in 2010. The authors say another increase of two or three years is possible in the near future.

There are a couple factors likely driving this trend. The Age Discrimination Act of 1986 ended mandatory retirement ages for scientists, and, like all other professions, science is dealing with the fact that the larger baby boomer generation is reaching what used to be retirement age but isn’t yet retiring.

The net result is that the percentage of researchers working into their 60s and 70s has doubled, and younger scientists make up a significantly smaller portion of the workforce than 20 years ago. It’s possible that some young researchers are being crowded out of the workforce by their older, more established counterparts, though Weinberg said it’s difficult to tell that for certain.

As for Einstein’s reputed belief that scientists are at their best when they are young, Weinberg said there is some truth that people are most innovative early on in more abstract fields like physics and mathematics, while more concrete, experimentally driven fields like medicine can favor more experienced minds. Even so, he said people tend to overstate how big a deal this is, in part because Einstein still looms large over the public conception of science.

“Physics was undergoing the quantum revolution when Einstein was working,” said Weinberg. “That kind of revolutionary theoretical work particularly favors young researchers.” What’s more, a relatively new field like the physics of Einstein’s day had less established knowledge for scientists to learn before they could start contributing, meaning young physicists could do world-shaking work.

That could mean an older scientist workforce isn’t as well-prepared to deal with the next great revolution in thinking — or that such a revolution is just what’s needed to cause another influx of brilliant young minds. Either way, claims that scientific genius depends on age remain greatly overstated.