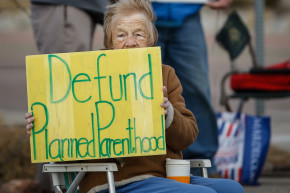 The Real Cost Of Defunding Planned Parenthood
By Leeron Hoory

President Trump’s health care bill took a beating on Friday before he axed it, but for Planned Parenthood, the fight is far from over. Anti-abortion advocates intend to keep pushing to obliterate Planned Parenthood, and some lawmakers are already pushing back with bills at the state level to protect these health care services in the case that they are threatened again in the future.

Pro-life sentiment of those on the conservative right might be the main driver pushing to defund Planned Parenthood, but PP clinics offer services that extend beyond abortion. Defunding them would likely strain other areas of public health and government spending, according to a study conducted by Miranda Yaver, lecturer in the Department of Political Science at Yale University. Her paper, “When Dual Incentives Become Dueling,” found that PP clinic access is associated with lower rate of teen births, fewer STD diagnoses, and a lower rate of emergency room visits.

“Planned Parent does a tremendous amount of preventative care, but because of this really quite small portion of their work that is more controversial tied to abortion, that tends to be what winds up in the news and the source of political entanglements, even though we don’t actually allocate federal funds to abortion services,” Yaver told Vocativ on Tuesday.

Though it sounds intuitive that clinics offering abortion and birth control services lead to lower rates of teen pregnancy, the impact has far reaching implications. “This ends up being an incredibly costly issue from both a standpoint of the individual and their families as well as taxpayers,” Yaver said.

Sixty percent of teen mothers don’t complete high school, which leads to a higher possibility of incarceration and lower paying jobs, the study states. In terms of government spending, in 2010, this added up to an estimated total of $9.4 billion of taxpayers dollars — a total that includes public sector health care, child welfare and incarceration costs — which ultimately shows how lower rates of teen pregnancy has “additional public health and economic benefits that the government can potentially reap,” the study states.

Despite the failure of Trump’s American Health Care Act, Democratic lawmakers in some states are not willing to run the risk of future attempts to cut birth control access and family planning services. In Nevada, state lawmakers are promoting a bill that will require insurers to cover contraceptives without extra charge. Lawmakers in Oregon are promoting a bill that would prevent government restriction on a woman’s decision to have an abortion. Another bill in Oregon requires health insurers to cover family planning services such as contraceptives, without extra charge.

Yaver found that reduced rates of STD diagnoses was one of the more robust associations to clinic access, presumably because of the access to birth control, information and education about safe sex. Treatment for STDs is also incredibly costly. The study sites an estimated 110 million infections in 2010, which cost a $16 billion dollars in treatment. Defunding PP would likely only increase these expenses.

PP clinics are also associated with a decrease in emergency room visits, which are currently overused and an economic burden on the health care system, likely because the lack of proper access to health care means more people will prolong treatment until a health concern becomes urgent.

“A lot of [PP] clinics do provide primary care and prenatal care, and if you image that you have access to an outpatient clinic, for example, whether you have a problem with your pregnancy or a UTI, you don’t have to go to an emergency room if you have access to a clinic in your community,” Yaver said.