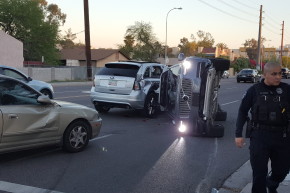 The self-driving car is not believed to be at fault

Uber’s self-driving cars have returned to America’s roads following a brief stoppage to investigate an accident involving one of its SUVs.

The crash, which happened in Tempe, Arizona, last Friday, involved one of Uber’s Volvos which the company said was in self-driving mode at the time of the crash. Police said another car — driven by a flawed human (for we all have flaws, every one of us) — was responsible for the accident. It allegedly failed to yield to the Uber, which would up on its side. There were no serious injuries, and Uber avoided yet another round of bad press even as its car could not avoid a car allegedly making an illegal left turn into it.

Uber chose to take its self-driving cars off the road shortly after the accident but has decided to put them back on Monday after investigators said the Volvo was not at fault for the crash. The Arizona Republic reported that the self-driving tests in Arizona and Pennsylvania will resume. It also pointed out that Uber, which has said it needs to perfect self-driving technology to ensure the company’s future, is lagging behind other companies in this regard. The more road testing time it can get in, the better.