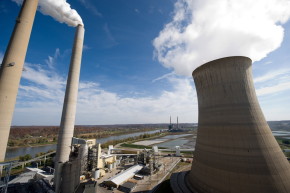 The order attempts to fulfill a campaign promise to undo the previous administration’s environmental regulations in the name of economic development, especially for the coal industry in Appalachia. But those outside the Trump administration remain skeptical that the Clean Power Plan is really what’s driving the decline of coal country, and whether the executive order can actually undo the regulation unilaterally.

As laid out by President Barack Obama in 2015, the Clean Power Plan calls for power plants to reduce carbon emissions by 32 percent by 2030. While the plan gives individual states some flexibility in how they pursue those goals, the fact that any future power plant must produce about half the emissions of current plants makes the construction of any new coal-burning plants highly unlikely. But this regulatory proviso may just reflect a more basic economic reality, according to both the plan’s chief architect and one of its foremost critics.

“I can certainly understand there’s difficulties in West Virginia, but you don’t blind yourself to the fact that it’s the market itself which is the challenge for coal country,” former EPA administrator Gina McCarthy said in an interview Sunday with WBUR. “Natural gas being inexpensive is what has knocked coal out of the marketplace in most places.”

McCarthy said that solar energy jobs are growing at a pace 12 times that of the overall economy, reflecting a market-driven shift away from coal and toward clean energy sources. The plan, she said, was not designed to close coal plants or prevent the construction of new ones that would otherwise be just fine, but rather reflect the fact that coal was already on the way out as a major part of the energy sector.

Robert Murray, whose Murray Energy is one of the largest independent coal-mining operations in the United States, called the Clean Power Plan “fraudulent” and the Obama administration “the greatest destroyers the United States of America has ever seen in its history” in an interview with The Guardian. Yet as much as he welcomed Trump’s executive order, he said the president should not assume the move will accomplish the stated goal of bringing jobs back to coal country.

“I suggested that he temper his expectations,” Murray told The Guardian. “Those are my exact words. He can’t bring them back.”

The executive order formalizes the White House’s already stated opposition to the Clean Power Plan. In the near term, that likely means the EPA will no longer defend the regulation in court, where it faces challenges from 28 states. Trump’s recently released budget blueprint also calls for the complete defunding of the plan. Even so, McCarthy challenged the idea that the president can dismantle the plan by fiat, arguing that the Trump administration would ultimately need to present its own evidence-based rule to replace the plan.

“You can’t undo it with a piece of paper like an executive order,” she told WBUR. “It’s a large hurdle to get from issuing an executive order to actually creating a new record on science and fact to base a differing rule.”

McCarthy, who is now at Harvard University’s Kennedy School, remains optimistic that the power sector is inevitably moving toward clean and renewable energy sources, as economic realities just dictate those make more sense than propping up industries like coal that made sense 40 or 50 years ago. What Trump’s executive order represents, then, is a statement of the country’s official priorities, with the Clean Power Plan providing a long-term signal to industry that they should continue investing and building up the renewable sector. The loss of that official signal, both to industry and to the world at large, is what McCarthy criticized most about the executive order.

“What it is frankly is it’s kind of embarrassing,” she said. “Because we’re not just taking away rules, we have a president who is denying climate science, which virtually every other country in the world understands and is acting on. They expect the US to be a leader. They want us there. We are one of the two biggest polluters in the world in terms of carbon pollution. We’re supposed to not just be doing the Clean Power Plan but doing our fair share.”

This piece was updated on March 28, 2017 when President Trump signed the executive order.