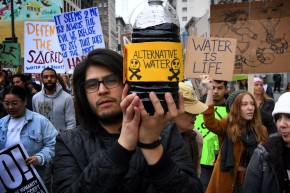 Keystone XL Opponents See Opportunities To Fight On Under Trump

President Donald Trump may have granted a key permit for the controversial Keystone XL pipeline on Friday, but tribal and environmental activists are far from giving up fighting the major fossil fuel project that they have been working to block for years.

In an open strategy session on Monday night, those on the call stressed that most energy insiders never thought resistance to Keystone— which would carry oil from the tar sands of Alberta across the midwestern U.S. into Texas —would last long enough to stop it from being built well into 2017. The consensus among experts in 2009 was that the pipeline was a done deal, with the TransCanada Corporation receiving needed construction permits by 2011.

In 2015, the Obama administration’s refused a key permit in large part to the efforts of grassroots organizers such as those on Monday’s call, who compared the task of protesting the pipeline to mowing the grass — every time the job appears done, the problem grows back.

Still, each passing year has tilted the situation in favor of the pipeline’s opponents, thanks to the combination of falling oil prices, the constant improvement of alternative energy sources like solar power, and growing public awareness of the environmental and indigenous cultural issues surrounding pipelines like Keystone XL and the Dakota Access Pipeline. “Now, no fossil fuel project on Earth goes unopposed,” said climate activist Bill McKibben, pointing to a fracking ban passed in Maryland earlier that day and ongoing protests in Australia of the Adani coal mine.

The inauguration of Donald Trump and his almost immediate move to revive the project represents a clear setback for organizers, but the president’s order only provides a permit for the pipeline to cross the border between Canada and the United States. TransCanada still has to secure a permit for the pipeline to cross Nebraska. Trump appeared unaware of this fact when he signed the executive order, saying he would call Nebraska Governor Pete Ricketts. The governor, however, has no role in the process, as the decision instead falls to Nebraska’s independent Public Service Commission. The pipeline will also face challenges in court and at the grassroots level.

The organizers identified the banks providing funding for TransCanada’s pipeline construction as major targets for protests. The Defund DAPL movement has seen tribes, cities, organizations, and private individuals divest about $5.4 billion from banks like Wells Fargo and Citibank whose loans support the Dakota Access Pipeline. Lindsey Allen of the Rainforest Action Network called for similar defunding efforts focused on Keystone XL in tandem with protests of the banks themselves, who she said are likely to be more responsive to public pressure.

“Standing outside of the White House might not convince Trump,” she said. “Standing outside of Citibank is really compelling when they literally cannot continue business as usual when we are standing right in the way and in front of those facilities.” Allen cautioned however that such civil disobedience does carry risks of arrest or mistreatment by law enforcement, particularly now. “It is a different climate we’re living in under Trump.”

Still, Trump’s public support for the pipeline might have its advantages, given his 36 percent approval rating in the wake of his failed health care reform bid. “Donald Trump poisons everything that he touches,” said McKibben. “For people who don’t know about Keystone, the sheer fact that Donald Trump thinks it’s a good idea is going to be one more reason that people understand that it’s not.”