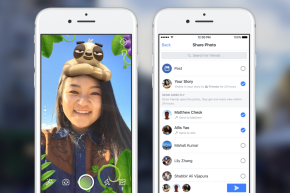 The social network looks to appeal to a younger audience with new filters, effects, and disappearing stories

Facebook is back at it releasing borrowed features from other social media platforms. The social network announced on Tuesday that it’s rolling out a new in-app camera feature that works exactly like Snapchat.

There’s really no other way to describe the new Facebook camera other than saying it’s a replica of the fun Snapchat app popular with teenagers. It will have dozens of effects like selfie masks, photo frames, and other interactive filters that users can apply to photos and videos. Some of the filters include falling snow, animal masks, and art-like filters.

“We want to make it fast, fun and easy for people to share creative photos and videos with whomever they choose, for however long they choose— and the more we share with each other, the more open and connected our community can be,” Connor Hayes, product manager, wrote in a the company blog.

Facebook will not only take inspiration from Snapchat with its camera and filters, but it’s also on a feature similar to Snapchat’s Stories — which have already been added to Facebook’s Instagram and Messenger. Facebook Stories will work like Snapchat Stories by allowing users to post ephemeral photos and videos that last 24-hours before they disappear. Stories can be found atop the News Feed, but can also be published to a user’s timeline.

There will also be a third feature rolling out called Direct, which is basically just Messenger. Direct will allow users to share their edited videos and photos privately with friends and family without having to post on their feeds. They will also only last 24 hours and can be replayed.

Facebook’s in-app camera feature will also have sponsored content from upcoming movies such as “Alien: Covenant,” “Despicable Me 3,” “Guardians of the Galaxy Vol. 2,” “Power Rangers,” “Smurfs: The Lost Village,” and “Wonder Woman.”

It seems Facebook did not hold back this time when it comes to borrowing from competitors. There’s nothing original about the new features, but it’ll be interesting to see how users react to it. Facebook’s new camera will be rolling out slowly on iOS and Android over the next couple months.