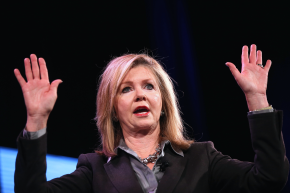 Marsha Blackburn (R-TN), sponsor of anti-privacy measure up for vote in Congress, has had a career financed by internet service providers

Update: The House has passed the resolution with a vote of 215-205.

The campaign contributions started small, with a handful of donations of a few thousand dollars each. In recent elections, however, it’s ballooned, with AT&T, Comcast, and Verizon each giving one of their favorite politicians in Congress between $15,000 and $20,000 every two years. All told, Rep. Marsha Blackburn (R-TN), author of a controversial resolution to let internet providers sell customers’ search histories to advertisers without notice or permission, has racked up well over half a million dollars in campaign donations from that industry over the course of her career.

Privacy advocates are resoundingly against the resolution, designed to undo rules created by President Obama’s Federal Communications Commission in the waning days of his administration. The rules mandated internet providers like Comcast and Verizon get customers’ permission before offering sensitive search histories, like financial and health information, to marketers.

Blackburn didn’t respond to request for an explanation of how the resolution could directly help consumers. She did previously offer Vocativ a statement defending the resolution as a defense against the FCC, arguing that it should only create such privacy rules in conjunction with the Federal Trade Commission. “A dual regulatory approach will only serve to create confusion within the Internet eco-system and harm consumers,” Blackburn said.

But an extended look at her history of industry campaign donations to her, comprised of both individuals in the industry and their associated political action committees, shows that the industry has substantially financed her election campaigns over the course of her 14-year congressional career, totaling at least $693,000.

“Representative Blackburn hasn’t done a single thing that crosses the phone and cable lobby,” said Tim Karr, Senior Director of Strategy at Free Press, a nonprofit that weighs in on online privacy issues. “She has been, for as long as I’ve known her, a champion of whatever agenda they put before her, and even when it means going against issues that benefit her constituents.”

“She has received more from the phone and cable lobby than almost any member of the House of Representatives,” Karr said.

Blackburn has a long history of legislation backed by the telecommunications lobby. She has repeatedly spearheaded attempts to kill net neutrality in Congress with an ironically titled “Internet Freedom Act,” and reportedly got a conservative think tank staffer fired for arguing Republicans should reform a 1998 online copyright law.

But unlike with her anti-net neutrality bills, Blackburn’s recent attempts to reverse the FCC privacy rules has serious support from her colleagues. A Senate companion to her legislation passed the Senate earlier in March with 50 Republican votes. Because it’s written as a joint resolution instead of a more conventional bill, it is both filibuster-proof from Democrats and will prevent the FCC from creating similar rules in the future.

Blackburn’s resolution is slated for a Tuesday vote, indicating she believes she has enough support that it will similarly pass the House. At that point, it will be a signature from President Trump away from becoming law.

This story has been updated to include comment from Blackburn.