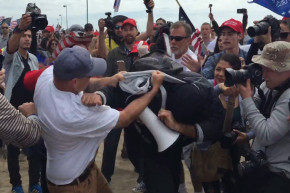 A pro-Trump demonstrator attacked a newspaper intern during a rally in support of the president that spiraled into chaos along a southern California beach.

Video captured at Saturday’s “Make America Great Again” march in Huntington Beach shows the Trump fan repeatedly pummeling 21-year-old Frank Tristan, who was covering the event for the OC Weekly. Two of the paper’s photographers, Brian Feinzimer and Julie Leopo, also claimed they were physically assaulted as Trump supporters clashed with counter-protestors, which sparked several of brawls and bouts of violence in the sand.

“My photographers and intern were just trying to do their jobs,” OC Weekly editor Gustavo Arellano said in a statement published by the Los Angeles Times on Sunday. “For that, they got harassed by Trump supporters, then shoved and punched when they tried to defend each other.”

Scenes of the melee flooded social media and cable news less than a day after Trump suffered a startling setback with the collapse of a Republican-led plan to repeal the Affordable Health Care Act. The march, one of dozens organized around the country to rally support behind the president, drew as many as 2,000 diehard fans to Bolsa Chica State Beach, according to local news reports. But the peaceful demonstration turned tense when the president’s supporters — who brought flags, bravado, and a bevy of patriotic swag  — confronted a group of black-clad counter-protestors that numbered roughly 30.

At least two Trump fans were blasted with pepper spray, according witnesses and reports, which triggered a wild free-for-all. Some of the president’s supporters stomped and beat a masked man who was on the ground. One of the demonstrators drew headlines — and resounding cheers from Trump fans online — when he used a “Make America Great Again” flag to bash the counter-protestor.

“I hit him five times with the flag over his head,” Travis Guenther told the Los Angeles Times, adding: “We’re not racist. We’re just proud Americans.”

Video shows that Tristan’s beat down came when he stepped in to stop a man in a white t-shirt and blue baseball hat from shoving his colleague Fenzheimer, who had just grabbed an American flag used by a woman to attack Leopo, the OC’s Weekly other photographer. The Trump fan landed a series of jabs and uppercuts to Tristan’s face, the video shows.

Authorities arrested at least four people at the march, all counter-protestors, California State Parks Police Capt. Kevin Pearsall said. Tristan, who published a report of the rally in the OC Weekly, said that the Trump supporters were the aggressors, adding that they chanted racial slurs at their opponents.

As for the man who punched Tristan? Arellano, the OC Weekly editor, said that the paper hopes to still identify him.