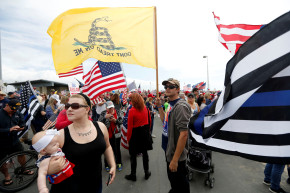 A heavily armed left-wing group, the John Brown Gun Club, made a surprise appearance over the weekend at a pro-Trump rally being held in Phoenix, Arizona with a conciliatory message for supporters of the president.

About two dozen men and women armed with a variety of rifles stood beside the march in downtown Phoenix, in order to both show their opposition to the Trump administration and its policies, and to appeal to supporters of President Trump as fellow members of the working class. The group describes itself as largely white and working class, with the ultimate goal of “total liberation of all working people, regardless of skin color, religious background, sexual orientation, gender identity, [or] nationality.”

The gun group laid out its message to the Trump fans in a Facebook post, stating “We are not here today as your enemies…We are now watching as preparations are made to slash the budget for meals on wheels, denying tens of thousands of senior citizens the nourishment they need to survive…We stand here to show you that there are other options. We stand here to show you that folks won’t quietly watch their communities be destroyed. We stand here with hope for a better future, one that we must all work together to defend and protect.”

Their message of solidarity fell mostly on deaf ears, as members of online pro-Trump communities like “The Deplorables” mocked the group as “snowflakes with guns.” Others saw the armed left-wing activists as threatening confrontation, daring them to “bring it on.”

The Phoenix pro-Trump rally passed without incident, as about 250 participants marched to the state capital to show their support for the president.