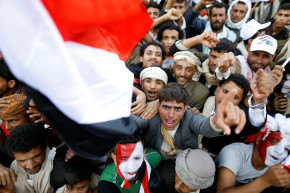 Pentagon officials are debating an increase in support for Saudi Arabia’s campaign against Iranian-backed Houthi rebels in Yemen that has brought the threat of famine to millions and locked the country in a grinding political standstill.

“We’re interested in building the capability of the Saudis” to operate in Yemen and elsewhere, one U.S. defense official told Foreign Policy magazine, speaking on the condition of anonymity. Defense officials told the magazine that the issue is under debate as President Donald Trump’s administration looks for strategies to counter Iran and its proxy organizations, as well as defeat ISIS, in the Middle East.

The discussion in Washington comes as hundreds of thousands of Yemenis took to the streets of the capital Sanaa on Sunday to mark two years since Saudi Arabia and Gulf countries launched the war in Yemen, which has killed hundreds of civilians and spurred a humanitarian crisis in one of the region’s poorest countries.

Under the banner, “Two Year of Steadfastness” (#عامان_من_الصمود), militants and activists chanted their support for the Houthis, whom the Saudi-led coalition has so far been unable to defeat.

Trump’s first Yemen operation on January 29 resulted in the deaths of about two dozens civilians and a U.S. Navy SEAL. The botched raid re-energized al-Qaeda in the Arabian Peninsula, which reported that it would exploit the incidence to ignite “the flame of jihad” again.

But the White House billed the raid as a success, and defense officials told ABC News earlier this month that the administration is intent on deploying more Middle East Special Operations Forces and will carry out more raids against alleged al-Qaeda targets.

“What we heard was that they would increase cooperation in all the dimensions” of military support and providing new weapons, Saudi General Ahmed Asiri, spokesperson for the Saudi-led coalition fighting in Yemen, told reporters in Washington. He said that teams from the two countries are already engaged in talks, and the increased cooperation would likely involve “intelligence sharing, equipment, and training,” for Saudi pilots and troops.

“We had a commitment that they will increase cooperation,” said Asiri.

If the White House supplies weapons and ammunition to the Saudi-led coalition, though, Washington risks inadvertently strengthening al Qaeda’s most lethal branch there, which has historically exploited the chaos of the war. It could also exacerbate an already severe humanitarian crisis that has been the result of Saudi-backed airstrikes and fighting on the ground.

The UN has reported that more than 10,000 civilians have been killed in the war and close to 42,000 people injured since the beginning of the war in March, 2015. Around three million have been displaced.

“The current political stalemate is causing death and destruction every day,” UN special envoy for Yemen Ould Cheikh Ahmed said in a statement. “A peace agreement, including a well-articulated security plan and the formation of an inclusive government, is the only way to end the war that has fuelled the development of terrorism in Yemen and the region.”

#Infographic
Outcome of 2 Years of the Crimes by #Saudi_Arabia and Its Alliance in #Yemen
Issued by:
Legal Center for Rights and Development pic.twitter.com/FwaMFSaZNZ