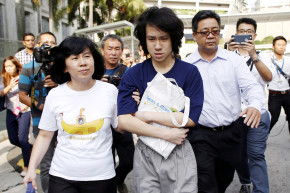 Amos Yee, a teenage blogger from Singapore who was jailed twice in the Southeast Asian city-state over his provocative, anti-government rants, was on Friday granted asylum in the United States. A judge in Chicago ruled that Yee faced political persecution in Singapore.

According to a 13-page opinion by Judge Samuel Cole, Yee qualifies as refugee because he was prosecuted and detained in Singapore over his political beliefs. Yee, who released several politically-charged vlogs, achieved notoriety in his home country over a video that celebrated the death of Lee Kuan Yew, Singapore’s founding father, and insulted Christians.

“Yee has met his burden of showing that he suffered past persecution on account of his political opinion and has a well-founded fear of future persecution in Singapore,” Cole wrote, as quoted by the BBC. “Accordingly, this court grants his application for asylum”

Singapore’s Ministry of Home Affairs released a statement that quoted some of Yee’s assertions, and added that Yee pleaded guilty to his charges.

“Yee had engaged in hate speech against Christians and Muslims. The U.S adopts a different standard, and allows such hate speech under the rubric of free speech,” the ministry said. “It is the prerogative of the U.S. to take in such people who engage in hate speech.”

Yee has been detained at Chicago’s O’Hare International Airport since December 16. Last September, Yee received a six-week jail sentence after he pleaded guilty to posting internet comments that criticized Islam and Christianity. Before that, in 2015, he spent four weeks in jail over the comments made in his Lee Kuan Yew video.

Sandra Grossman, Yee’s attorney, told Reuters that he is immediately eligible for release.

“The right to free speech is sacred, even when such speech is considered offensive,” Grossman said. “The decision timely underscores the vital need for an independent judiciary in a functioning democracy.”