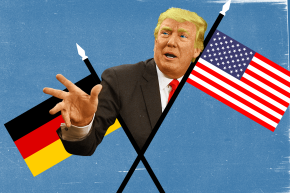 Putting Past Aside, Jews Seek German Citizenship In The Age Of Trump
By Jessica Leber

Putting Past Aside, Jews Seek German Citizenship In The Age Of Trump

On election night in November, Dari Stolzoff watched the late returns with the sinking feeling that the country she was born in was suddenly foreign to her. Trump’s win shocked her in a visceral way, as it did for many of her neighbors in the liberal state of Washington.

“That bubble really did burst,” she said. “I was terrified.”

Soon after, Stolzoff learned she had an option to ease her fears about the future, if not to actually act on, that most of her neighbors do not: She could apply to to become a citizen of Germany.

Stolzoff’s grandmother was a German Jew who fled the Holocaust by going to China, living for a time in Shanghai’s Jewish ghetto before eventually entering the U.S. with her husband and son. Stolzoff never knew her grandmother, but she learned recently that if she could dig up the right documentation, she could apply for restored German citizenship as a direct descendant of a victim of Nazi persecution. She’s looking for her grandmother’s birth certificate now.

Jews all over the world have taken advantage of their right to German dual citizenship, especially in recent years, as a generation more removed from the Holocaust — usually the grandkids — has felt less uneasy about the historical irony of returning to a country that persecuted or killed their relatives. Many apply seeking the perks that come with gaining an EU passport and the flexibility to work and live abroad.

Yet the increase in applications Germany has received more recently is also driven by something else: politics, fear, and uncertainty about the future. After Brexit, the Guardian reported in October that applications from British Jews came flooding in, with a spike from around 25 annually to at least 500 in 2016.

A similar trend is emerging from the U.S. since President Trump’s win and the increase in anti-Semitic episodes that has followed, with Jewish cemeteries being vandalized, bomb threats at Jewish Community Centers, and the political rise of the white supremacy-embracing “alt right.”

Many are seeing Germany in a new light, too. While Trump has promoted an isolationist, populist agenda that walks America back from its traditional role as a Western leader, German Chancellor Angela Merkel has stepped forward, welcoming refugees and embracing free trade as leader of Europe’s largest economy. Politico called her the “leader of the free world” when she met with Trump in March.

Already from November to January, there’s been a “perceptible increase” in U.S. applications for restored citizenship, said Bradford Elder, press officer at the German embassy in Washington, DC. In the month of January 2017, which is the most recent with available data, applications were more than double what they were in January the year prior. The general interest in submitting an application, he said, has “also significantly increased since November.”

Julius K. Niesert, a German immigration attorney in New York City, felt this almost immediately after Election Day. His firm, Rowland & Petroff, began fielding calls every week on the topic rather than a handful a year.

“I would say 50 percent are directly linking or mentioning our new president as one of the reasons why they are more concerned and why they think that having an additional citizenship would be a good option,” he said.

Many don’t seem to have concrete plans to move to Germany, but they view citizenship as a backup plan, with right-wing extremist sentiment on the rise both in the U.S. and globally (the Trump administration has even been accused of flirting with Holocaust denial).

“I’m not dying to leave the country,” said Karen Sime, a college professor at SUNY Oswego who started the process of applying for German citizenship more than a year prior to the election and is still waiting for a response. “But whenever we hear some particularly gruesome story in the news, my husband will be like ‘so how’s that German citizenship application coming along?”

Donna Swarthout, an American Jew who now lives in Germany as a citizen, said the U.S. election reinforces her decision to stay away. Contributors to a book she is writing about restored citizenship have also cited a new perspective on the value of their German passport since the election, she said.

There is, of course, tension in the idea that American Jews whose past has been shaped by persecution could ever consider leaving the U.S. as others — particularly Muslim refugees and undocumented immigrants — are targeted by the Trump administration.

Jews who have been refugees throughout history have a “moral obligation to today’s refugees,” said Rabbi Jennie Rosenn, vice president for community engagement at the U.S. refugee resettlement agency HIAS, which was active during World War II and is today.

“While I can understand in the current devastating climate in our country an individual’s desire to expand their options — to look to see where else besides America might they be able to live, I think it is problematic in the same way that seeking escape to Canada is,” she told Vocativ in an email.

Sime agreed, saying she wouldn’t want to leave the country and abandon the many who are more vulnerable than her. Anyway, most of her anxieties about Trump, on issues such as climate change and the global economy, would follow her to Germany if she ever lived there. Mostly, she hopes her application will provide additional options for her children.

However, for Stolzoff, leaving the U.S. is a “constant topic of discussion” between she and her husband, regardless of whether her German citizenship comes through. Sometimes, those discussions involve imagining a truly catastrophic future in the U.S.

“There were too many people who didn’t move soon enough and died because of it,” she said, referring to World War II. “It was called ridiculous or nonsensical — what could possibly happen here? I don’t want to be part of that this go-around.”