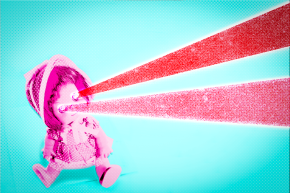 We’re in a brave new world of children’s toys — Barbie can connect to the internet and teddy bears come with wifi content updates. This means all sorts of exciting things for kids — their dolls can learn their names and have interactive conversations. But a new study warns that these internet-connected playthings raise concerns about children’s privacy and security, and have potentially troubling “implications for social evolution.” It’s time, say the authors from the European Commission’s Joint Research Centre (JRC), to learn more about these toys and develop new guidelines for how they are regulated.

“These devices come with really interesting possibilities and the more we use them, the more we will learn about how to best manage them,” said lead researcher Stéphane Chaudron. “Locking them up in a cupboard is not the way to go. We as adults have to understand how they work — and how they might ‘misbehave’ — so that we can provide the right tools and the right opportunities for our children to grow up happy in a secure digital world.”

More Internet-Connected Toys May Be Great Gifts, But Pose Risks To Kids

The paper, published by JRC, comes at an appropriate time, given recent reports of Internet-connect toys being hacked, including Mattel’s Hello Barbie, Geneses’ Cayla Doll, and Fisher-Price’s Smart Bear. A couple months ago, the Campaign for a Commercial-Free Childhood filed a complaint with the Federal Trade Commission to take action against toy manufacturers that record and share toy data without consent. This report essentially validates what several children’s advocacy groups have already said about the potential pitfalls of these connected toys.

While giving a brief nod to recent toy hacking headlines, the authors mainly focus on the security issues raised by toy companies’ privacy policies. As the report points out, many of these toys let manufacturers “record, analyze, use and even sometimes share” data from the toys — and that can include personal information, like names, ages, and addresses. Parents, they say, are often unclear on just where a toy company stands on the sharing of this data, thanks to lengthy, hard-to-read privacy policies. “How many parents actually take the time to read those documents before choosing a new toy, or as the child starts to use it?” the paper asks. “Usually, very few, if any.”

The security concerns go beyond just the potential exposure of a child’s name, age, and location, which is troubling enough. As the report points out, “Teddy bears have always been the best at keeping secrets. What if from now on, Teddy can share those secrets with others? The question is open and left to the parents, teachers and other carers to consider.” The authors add that “children are people, with emotions, feelings and rights” and argue that “one has to think carefully about the purpose of recording and sharing the sounds, images and movements of children’s play.”

The authors also highlight how little we know about the impact of children playing with what are, essentially, robots. So often, the potential benefits — for example, foreign language learning — are highlighted, but the authors also point to more dystopian possibilities. For one, these toys might “increase the risk of educational bubbles or, more generally ‘filter bubbles’, that is, the notion that, through filtering algorithms, children may only receive information that fits their pre-existing knowledge and interests, while contradictory information is withheld from them,” the authors write. (We Facebook-using adults wouldn’t know anything about that.)

More Talking Toys Could Be Spying On Your Children

More disturbingly, they suggest that “children may find interaction with a robot so attractive that it gradually displaces interaction with humans, notably when social robots are humanoid.” And, turning the apocalyptic dial yet more, they add that interacting with robots in this way might create a “master-servant” relationship in which the “child dominates and objectifies the robot.” That they say, “may carry over to children’s relationships with other humans.”

So, that harmless-seeming, wifi-enabled teddy bear is really just a tool for creepy hackers to steel your kid’s secrets and toy manufacturers to create a generation of sociopaths — yay! Another thing for parents to worry about. But, really, despite these scary warnings, the paper just wants to see more research and better understanding of the actual impact, beyond the frightening hypotheticals, and better guidelines from policymakers for how these toys should be regulated. That seems pretty reasonable, given that, as they write, “today’s generation of children is probably the first generation whose entire life will be shaped by social robots.”