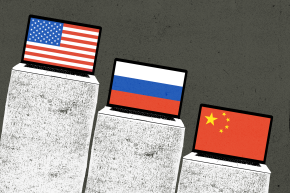 American companies aren't perfect. But they're far better than its international equivalents

Despite hesitations you might have about what American internet services do with your data, they’re still much better at protecting your privacy and dodging censorship than major online companies elsewhere in the world.

The annual Ranking Digital Rights survey, funded by the Open Technology Institute, a think tank focused on online and technological issues, found that companies like Google and Facebook still score much better on privacy and free expression issues than, for instance, China’s Baidu and Russia’s Yandex, their roughly international counterparts. Perhaps unsurprisingly, South Korean companies also scored much higher than those in China and Russia, where strict laws heavily monitor and censor internet use.

The study looks at ten of the biggest internet companies around the world, most of which use both a messaging or email system and a search or social network system. American companies include Facebook, Microsoft, Apple, Twitter, and Yahoo from the U.S. Other companies in the study are China’s Google-like Baidu and Tencent, Russia’s Mail.Ru and Yandex, South Korea’s Kakao and Samsung, largely for its creation of phones that run the Android operating system.

It looks at a number of metrics, including how likely a company is to crack down on user expression or if it offers users a way to tell companies they’re being censored. It also looks at whether the companies themselves openly declare an intention to promote free expression, how likely it is to share user information with governments, and whether they help governments shut down certain information.

Broadly speaking, smartphones, where your apps compete for permissions and often have access to your contacts and location, are still on shaky ground when it comes to having clear privacy policies. Google’s and Samsung’s implementation of Android and iPhones all “failed to sufficiently disclose policies affecting users’ freedom of expression and privacy,” the study’s authors found.

The study also found that although the companies operating under more authoritarian governments have weaker privacy and free expression policies, that doesn’t mean the companies themselves can’t still make choices. For example, Yandex showed much stronger privacy and cybersecurity practices than Mail.Ru. Along the same lines, Tencent outperformed Baidu, particularly in the privacy category.

“While state secrets laws make it unrealistic to expect Chinese companies to reveal information on government requests to delete content or accounts or hand over user information, there is no legal obstacle to disclosing a range of information about how the company handles user information in the commercial context, as well as the security measures it takes to protect user information,” the study found.