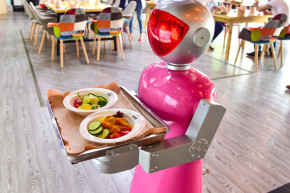 Robots Will Take Many Jobs By 2030, But Don’t Tell That To Trump Admin
By Allee Manning

Robots Will Take Many Jobs By 2030, But Don’t Tell That To Trump Admin

Yet another study predicts the coming automation job-pocalypse, even as Treasury Secretary dismisses risks

While we already know that the now cliché “they’re stealing our jobs” rhetoric centering around immigrants is xenophobic, it’s also becoming outdated. What Americans should be more concerned about is the rise of automation, and how artificial intelligence may soon overtake many existing jobs in today’s workforce. A new report from professional services network PwC estimates that 38 percent of U.S. jobs at are high risk for robot replacement within the next 15 years, though some will be replaced by new kinds of jobs.

The Trump administration seems blissfully unaware of these risks, however. At an event this morning, Treasury Secretary Mnuchin reportedly said that the problems of AI and automation, as it affects the workforce, are not on the administration’s radar screen and that he is not worried about the risks at all. This flies in the face of the PwC’s report and multiple other studies that have come before it.

This thread on how Mnuchin thinks about automation/AI and the workforce is BANANAS. https://t.co/uVqMGrIFLW

According to PwC’s analysis, which focused on the UK, the sectors at the highest risk include manufacturing; water, sewage, and waste management; and transportation and storage. This isn’t a major surprise given that manufacturing employment has fallen dramatically since the 1960s. In the U.S., a large part of the early discussion surrounding self-driving cars addresses the uncertain future of America’s truckers.

“A key driver of our industry-level estimates is the fact that manual and routine tasks are more susceptible to automation, while social skills are relatively less automatable,” PwC chief economist John Hawksworth said in a company blog post. The sectors PwC deemed least at-risk were domestic personnel and self-subsistence and human health and social work.

It’s for this same reason that jobs performed by men are also more at risk than those typically performed by women.

Of course, as the job market changes, exact predictions of this nature will almost certainly shift. In 2013, an Oxford University study estimated that half of all jobs would be at high-risk for automation within the next 20 years. The threat of humans losing their jobs to automation and artificial intelligence is not new and has been long forecasted (even outside of science fiction). Back in 2015, Stephen Hawking and Elon Musk were among the tech bigwigs to release an open letter cautioning against how job loss could be among the pitfalls of an artificial intelligence revolution. Can’t say we weren’t warned.