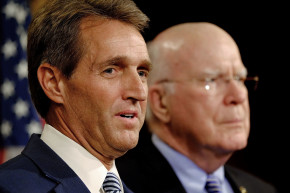 The Senate voted Thursday to allow internet providers to sell customers’ online activity without their permission or awareness.

Joint Resolution 34 passed with a 50-48 vote, strictly on party lines, thanks to Republican support.

The resolution undoes a final act by President Obama’s Federal Communications Commission, which created new restrictions for internet providers seeking to use customer data for marketing purposes. Privacy advocates resoundingly praised the rules at the time.

Those rules were politically tenuous, however: That FCC also voted strictly along party lines to pass them, tempting a Republican backlash. The resolution’s sponsors, Senators Ron Johnson (R-WI) and Jeff Flake (R-AZ), didn’t respond to Vocativ’s request for comment about how it could help consumers. As Laura Moy, Deputy Director at Georgetown University Law’s Center on Privacy and Technology, previously told Vocativ that “The only ones who are fighting against the rules and fighting against the FCC’s privacy jurisdiction are the companies directly” and related industry trade groups.

While the internet provider and telecommunications industries donate heavily to both parties, a previous Vocativ analysis found that of the 22 senators who initially sponsored the resolution, all had regularly received heavy funding from companies and trade groups in the area. Those 22 alone had received more than $1.7 million from such organizations since 2012 alone.

“This resolution is a vote for big corporate profits over the rights and civil liberties of average people,” Nathan White, Senior Legislative Manager at the internet advocacy group Access Now, said in a statement.

“Senate Republicans just struck a massive blow against everyone who uses the internet, dismantling rules protecting people’s private information from unauthorized use and abuse by cable and phone companies,” said Gaurav Laoria, counsel at the nonprofit Free Press. “At their core these rules simply would give people the right to decide for themselves whether to allow their ISPs to share or sell their personal information, including their web-browsing histories.”

Flake’s own office described the resolution as a rebuttal to FCC overreach, saying those ruled had “the potential to limit consumer choice, stifle innovation, and jeopardize data security by destabilizing the internet ecosystem.”

Under the Congressional Review Act, if the joint resolution passes both houses of Congress and is signed by the president, it will have a more forceful effect than if it passed simply as a conventional bill, as it will forbid the FCC from creating similar rules in the future.

The issue now moves to the House, where Rep. Marsha Blackburn (R-TN) has introduced a companion joint resolution, also sponsored entirely by Republicans. If that passes, it will only require President Trump’s signature to take effect.