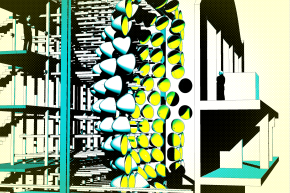 Germany Powers Up An Artificial Sun
By Alasdair Wilkins

Germany Powers Up An Artificial Sun

Because research into solar energy shouldn’t have to suffer through little inconveniences like cloudy days, the German Aerospace Center announced Thursday that the world’s largest artificial sun has gone online in its facility outside Cologne. Known as Synlight, this massive indoor facility can generate light 10,000 times more intense than the sunlight hitting Earth’s surface.

The center’s Institute for Solar Research hope Synlight will make it possible to manufacture solar fuels, which is when the sun’s energy is converted into a chemical fuel that can be stored for later use. Hydrogen fuel is one possibility. The idea of hydrogen-powered vehicles has been around for a while, and there are a few such cars already on the road. But almost all hydrogen fuel is currently made from natural gas, not solar, which doesn’t reduce dependency on fossil fuels or do much to lower carbon emissions.

Synlight is made of 149 individual arc lamps, each one about 4,000 times the wattage of a typical light bulb. When properly focused, the artificial sun can create temperatures of about 6,300 degrees Fahrenheit, or about two thirds that of the surface of the actual sun. Beyond testing solar fuels, researchers also hope to use the facility to subject space travel parts to solar radiation. All of the lamps can be focused on a single point, or the artificial sunlight can be divided between the facility’s three experimental chambers.

Perhaps the most impressive thing about the artificial sun is a detail buried at the bottom of an earlier announcement from the Institute of Solar Research: “After commissioning in a DLR pilot project, the largest artificial sun of the world will be ready for solar radiation testing from research and industry as of early 2017.” That was written in 2014. It’s the rare engineering project of this scale that actually hits a three-year deadline.