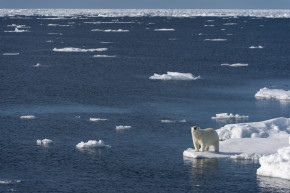 Since last year, we've lost sea ice equivalent to the size of Maine

Scientists have found that the Arctic sea ice is at a record annual low, continuing down a worrying trend.

In order to measure the spread of sea ice at its highest point throughout the course of the year, the National Snow and Ice Data Center (NSIDC) and NASA have been using satellite measurements for the past 38 years. This February, when sea ice levels were at their highest point, the Arctic Ocean’s sea ice spread 5.57 million square miles, down from 5.606 million square miles than last year. As reported by the AP, that’s roughly equivalent to losing the state of Maine in floating ice.

Losses were also observed at the earth’s opposite pole, which NASA stated is uncharacteristic. Combined, Arctic sea ice loss, and Antarctic sea ice loss this year is equivalent to the size of Mexico.

Though 2016’s maximum sea ice coverage in the Arctic was higher than it had been in 2015, the gain observed then was far more meager than the loss observed this year.

“I have been looking at Arctic weather patterns for 35 years and have never seen anything close to what we’ve experienced these past two winters,” NSIDC director Mark Serreze said in a press release.

The reason Serreze and his coworkers gave for this change was an unseasonably warm autumn and winter. Last year featured the hottest temperature on record, and heat waves across the Arctic Ocean melted a sizable amount of ice this past winter. NASA scientists Walt Meier described the decline observed as a “clear indicator of climate change.”

While it is still unclear what Arctic sea ice minimum for this year will be (that global climate status indicator’s measurements are typically taken in September), the trend is certainly cause for concern. Some climate scientists have estimated that all Arctic ice could be melted due to the effects of global warming by 2045.