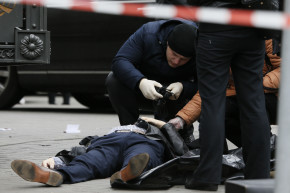 Investigators inspect the body of Denis Voronenkov — REUTERS
By Shira Rubin
Mar 23, 2017 at 8:46 AM ET

Denis Voronenkov, a critic of Putin’s 2014 annexation of Crimea, was killed around noon in the center of Kiev. His bodyguard, who was injured in the attack, fired back at the shooter. The attacker’s identity is unknown, said Kiev police chief Andriy Kryschenko.

Voronenkov had been scheduled to testify as a key witness against former Ukrainian President Viktor Yanukovych, an ally of Putin’s who has been living in exile in Russia since being ousted from office three years ago.

In a statement, Poroshenko described the victim as a key witness who gave testimony about “Russian aggression” to the Ukrainian authorities.

Voronenkov has been living in Ukraine since last October with his wife, opera singer Maria Maksakova who was also a former parliamentary member He’d said that he and his wife were forced to move because of political persecution from the Russian authorities that claimed he’d been involved in illegal seizure of property in Moscow. Voronenkov and his wife renounced their Russian citizenship and were granted Ukrainian citizenship.

In an interview with Radio Free Europe, Voronenkov compared the situation in Russia to “Hitler’s Nazi Germany.”

“We need to be careful. We are poking a sore spot of the Kremlin with our statements,” Voronenkov told Radio Free Europe back in February.