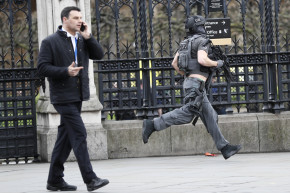 Armed police respond outside Parliament during Wednesday's terror attack — REUTERS
By Gilad Shiloach and Shira Rubin
Mar 23, 2017 at 8:32 AM ET

ISIS has claimed responsibility for the terror attack in London that killed three people and injured 40 when a man drove an SUV into pedestrians on Westminster Bridge and then stabbed a police officer. He was shot and killed by police.

ISIS’ media and propaganda outlet, the Amaq News Agency, posted in a Telegram channel that the man responsible was “a soldier of the Islamic State who carried out the attack in response to calls to target countries of the coalition fighting ISIS.”

There was no mention of the man’s name in the Amaq announcement, which followed the pattern of previous claims of responsibility for lone wolf attacks. British authorities haven’t released the man’s name as yet.

British Prime Minister Theresa May said the “sick and depraved” act was carried out by a British-born man who acted alone and was known to the authorities.

“The location of this attack was no accident,” May said. “The terrorists chose to strike at the heart of our capital city where all nationalities, religions and cultures come together to celebrate the values of liberty, democracy and freedom of speech,” she said.

Before the attack, ISIS supporters began a thread on an online forum with a tutorial for preparing knives at home for lone wolf attacks. Responding to the tutorial, one commenter suggested making the blade out of material that could pass through metal detectors. After news of the attack began to spread, attention to the forum grew online, with members saying they appreciated the information.

The current threat level in the UK remained at “severe,” meaning that a terror attack was highly likely.

Wednesday’s attack came during the one-year anniversary of a coordinated string of terror attacks in Brussels that was claimed by ISIS and left 32 people dead.

The most recent ISIS-related attack in the UK occured in December, 2015, when an ISIS-inspired taxi driver attempted to behead a passenger at a subway station.