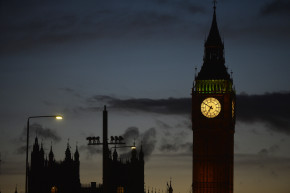 The incident is being investigated as a terror attack

Three people, including a police officer, were killed and dozens more injured after an assailant rammed a car into civilians on Westminster Bridge in London on Wednesday. Police officers shot and killed an assailant, after he stabbed the officer outside the center of British government.

“There has been a serious incident near to Parliament Square which is being treated as a terrorist attack until the police know otherwise,” said London Mayor Sadiq Khan in statement following the Wednesday afternoon attack, noting than an “urgent investigation” is ongoing.

The Palace of Westminster, home of the British Parliament, was placed on lockdown with members of parliament inside. Prime Minister Theresa May was ushered out of the building and is safe. There were also reports of multiple gunshots.

Nothing is known about the motivations behind Wednesday’s incident, though Prime Minister Theresa May said on Thursday that the assailant was British-born and known to police and security officials.

The attack took place on March 22, one year to the day since a coordinated string of attacks in Brussels left 32 people dead. More than 100 were wounded in the series of blasts at that nation’s biggest airport and a metro station. The Islamic State claimed last year’s attack.

Westminster Bridge is a popular tourist attraction in London, where crowds often jostle to take photographs of the seat of British government.

Commons Leader David Lidington gave a statement to the members of parliament on Wednesday afternoon, saying, “There has been a serious incident within the estate. It seems that a police officer has been stabbed, that the alleged assailant was shot by armed police.”

There’s been a shooting outside work. We’re not allowed to leave the building. pic.twitter.com/7Y5Qf7XOoe — Fineapple (@MissMarthaEva) March 22, 2017

Several members of Parliament posted tweets from inside the lockdown.

Very tense atmosphere here. Most of us just desperate to be with our families. So worried for those involved.

Scene inside suspended House of Commons where MPs are locked in Chamber as part of major security operation at palace pic.twitter.com/iGqFEc0LZL — Steve McCabe (@steve_mccabe) March 22, 2017

The use of a vehicle — as was reported in Wednesday’s attack — is consistent with recent instructions promoted by ISIS in its English-language magazine. In August 2016, a man plowed through a crowd in Nice on Bastille Day, killing 86 and injuring hundreds more. Three months later, a truck was driven into a Christmas market in Berlin, killing 12. Both attacks were claimed by the Islamic State.

This is a developing news story. Check back for updates.