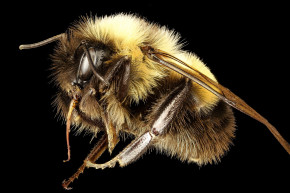 One Bumblebee Finally Gets Endangered Status, Other Bees Still Waiting
By Alasdair Wilkins

One Bumblebee Finally Gets Endangered Status, Other Bees Still Waiting

Federal protection for rusty patched bumblebee could benefit other endangered bees, according to biologist

It took longer than it needed to, but the rusty patched bumblebee is the first bee species in the continental United States protected by the Endangered Species Act. The Tuesday announcement from the U.S. Fish and Wildlife Service came after the end of the Trump administration’s 60-day freeze on new regulations.

The rusty patched bumblebee’s officially recognized status gives the once common pollinator a better chance to ward off extinction, but it’s only one of several species considered endangered or vulnerable by the International Union for the Conservation of Nature. Federal protection will make money available to set up or preserve habitats on both private and public land, and it will forbid any action that could harm the species or its habitat.

“That could mean the use of insecticides, it could mean development, it could mean all the sort of things,” biologist Rich Hatfield told Vocativ. Hatfield works for the Xerces Society for Invertebrate Conservation, which was one of several environmental groups that petitioned for this protection for the rusty patched bumblebee.

Once found throughout 28 northeastern and midwestern states and two Canadian provinces, the species is now reduced to scattered populations across 13 states. “These protections will protect all the beneficial insects that are in those areas by creating habitat, by reducing insecticides,” said Hatfield. “All those things will help many other species of bumblebees. There are a couple other bumblebees in the east that area also critically endangered.”

More Bee Species’ Endangered Protection In Jeopardy Thanks To Trump

The protections won’t have as direct an impact on imperiled bumblebee species in the western United States, although Hatfield said federal recognition for one species could bring national awareness to the problems all bees face and help regulators in the future.

As of now, three other bumblebee species remain under review for official recognition as endangered. Franklin’s bumblebee, found primarily in Oregon, has technically been waiting since 1989. Hatfield said the Xerces Society first petitioned for protection for the rusty patched bumblebee in 2013. The agency designated two other species deserving of further review in March 2016.

Though the 60-day hold might appear to fit into the Trump administration’s perceived anti-environmental bent, Hatfield said his sense was that this really was a routine review. In fact, the protection went ahead despite a joint emergency petition from petroleum, pesticide, energy, farming, and homebuilding industry groups asking the rule be delayed until January 2018 on business grounds.

Protecting bumblebees is in everyone’s long-term best interest, Hatfield said. Their loss would force farmers to take over the task of pollinating their crops. As it is, the bee situation is so dire that California’s annual almond bloom requires the mass importation of honeybees.

Bumblebees are particularly important, as they are the only type of bee adapted to the cold and rain so that they can pollinate crops that bloom early in the spring. Bumblebees are also native to North America, unlike their honeybee cousins, which were brought here by Europeans. That means honeybees require management by humans to keep them thriving. “It’s very different from having these 400 to 700 species out there pollinating for free,” said Hatfield.