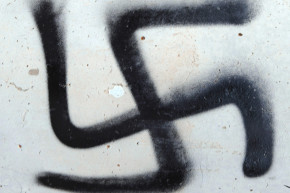 Trump Fan Accused Of Putting Swastikas On His Own Home

Andrew King claimed that someone put swastikas on his house; he's now accused of doing it to himself

A man who claimed to be Jewish and also claimed that someone else spray-painted swastikas on his home last month has been arrested for allegedly spray-painting them himself. Also, he may not be Jewish.

Andrew King, of Schenectady, New York, told his local paper The Daily Gazette all about how he awoke one morning in February to find two swastikas on his house. The article mentioned that King was a “devout Jew,” as demonstrated by a yarmulke he says he wears frequently and by the fact that he was in the midst of preparing for Shabbat when he was interviewed.

When asked about the link between incidents like these and the election of Donald Trump, King said he was actually “a strong advocate of Mr. Trump’s politics … I am a strong Conservative. I do not point the finger at Mr. Trump. Mr. Trump is basically an honorable man.”

Well, now the police are pointing the finger at King. He was arrested on March 20 and charged with falsely reporting an incident. A local news station then asked Jewish leaders in the community about King and were told that though he has tried to convert “several times,” he was turned down by at least two congregations.

It was not made clear how police determined that King was the actual graffiti artist. Though King’s support of Trump was clear from the start, some far right websites of dubious legitimacy (including Milo Yiannopoulos’ website) are claiming he is “anti-Trump” or an “anti-Trumper” and did this to make Trump supporters look bad. Then again, King’s claim of being a Trump fan may be as real as his claim that he’s Jewish.

When King first “found” the swastikas, he said he was going to leave them up to “show people who thrive on hate, in my opinion, that love trumps hate in the long run.” It’s not clear that this was his intent, but it certainly is one way to get away with putting swastikas on your house without people thinking you’re a racist … until you get caught, anyway.

All this said, King’s lawyer told the Albany Times Union that he is schizophrenic. If true, his alleged actions may not be politically driven, but simply be the product of a severe mental illness.