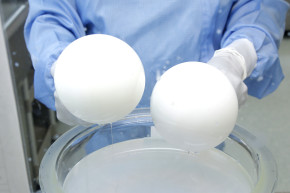 Nine people have died, according to the FDA

A technician works in the processing of silicone gel breast implants — REUTERS
By Allee Manning
Mar 22, 2017 at 11:32 AM ET

Nine people have died due to a rare cancer associated with breast implants, according to the FDA.

The cancer, called anaplastic large cell lymphoma (ALCL), is a blood cancer that affects the immune system and typically appears in the skin, lymph nodes, or bodily organs.

The link between breast implants and this form of cancer was formally announced by the FDA on Tuesday following six years of research. Since 2011, when the possible connection first came to the agency’s attention and implant manufacturers began addressing the potential correlation in packaging inserts, 359 cases have been noted. However, the FDA release notes that the exact number of cases is difficult to determine due to limitations in reporting and implant sale data.

More Butt Implants Are Taking Over The World Of Plastic Surgery

Researchers found that textured implants, which attach to the tissue surrounding the site and are reportedly preferred by many plastic surgeons, led to more ALCL cases associated with breast cancer than smooth implants. Whether the implants were filled with silicone or saline did not appear to make a difference.

At this point, the FDA does not recommend any drastic changes in how plastic surgeons provide care. Women with implants already should simply continue to follow standard post-op medical care, knowing that their risk is “low but increased…compared to women who do not have breast implants.”

Breast augmentation continues to be the most common cosmetic surgical procedure performed in the U.S., though it’s notable that implant removals were up last year from 2015. Aside from increased risk of ALCL, the FDA lists 26 potential complications that can result from implants, ranging from breast pain to necrosis.