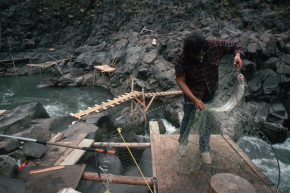 A Yakima Indian catches a Chinook salmon in the traditional way, using a dip net on the Klickitat River, Washington. | Location: Washington, USA. — Getty Images
By Alasdair Wilkins
Mar 29, 2017 at 9:32 AM ET

Every April, the Indian tribes along the Columbia River between Oregon and Washington hold the First Salmon Feast, a ceremonial harvest of the fish that sustain these communities. Hundreds of salmon are grilled outdoors, while tribal elders lead the singing of traditional songs thanking the salmon for their sacrifice.

“They provide the cultural backbone for providing food for our feasts, for our funerals, for our ceremonial gatherings,” said Sarah Thompson of the Columbia River Inter-Tribal Fish Commission. “They provide an economy for our tribal fishermen in order to support our families.”

Salmon can’t survive without clean coasts and rivers, which is ultimately the responsibility of the Environmental Protection Agency. But President Donald Trump’s budget blueprint asks for a 31 percent reduction in EPA funding, the most severe proposed cut for any cabinet-level department. Several programs face elimination or near-total cuts, including some specifically designed to address the needs of vulnerable communities. In the blueprint, the Trump administration calls for state and local governments to take primary responsibility for looking after the environment.

It’s a vision that would likely prove devastating to native communities throughout the United States.

In general, it’s the federal government’s job to regulate pollution that crosses state lines: North Dakotas can’t just let factories dump toxins into rivers that flow into South Dakota, for example. But states themselves often do much of the enforcement work. From its inception in 1970, the EPA spent hundreds of millions building up state governments’ environmental agencies so that they could deal with local pollution.

The problem is that the nation’s 566 federally recognized tribes are their own sovereign governments, independent of the states that surround them, and they don’t have the same resources, said James Grijalva, the director of the Tribal Environmental Law Project at the University of North Dakota. It wasn’t until the mid-90s that tribal governments received similar attention from the EPA as states, and then only with a fraction of the funding.

Today, only the Navajo Nation, the country’s largest reservation, has been able to build the regulatory infrastructure necessary to deal with pollution and other environmental issues on anything like a level playing field with the states, he said.

But a severely reduced EPA would have little choice but to focus on the most pressing concerns: cleaning up sites that are an immediate risk to public health, handling licenses and permits for polluters, and overseeing basic enforcement.

Specific program cuts would also disproportionately hurt tribes. These include regional programs targeting cleanup in the Great Lakes and the San Francisco Bay, grant programs designed to support environmental justice and environmental education, monitoring and cleanup efforts for chemicals like radon, and infrastructure assistance for tribes in Alaska and along the Mexican border.

For example, native communities in the northwest’s Puget Sound region, where the EPA is involved in a multi-million-dollar project to restore water quality, are concerned about potential cuts. While the budget blueprint makes no explicit reference to that program, an earlier report indicated the administration planned a 93 percent cut, from $28 million to $2 million.

“The magnitude that they’ve been talking about, it would be devastating for just about everything,” said Tony Meyer of the Northwest Indian Fisheries Commission. EPA funding has helped address basic water quality issues, like the fact that until recently there weren’t enough ports for boats to pump out their sewage. In 2016, the EPA approved a no-discharge zone, intended to prevent boat waste from getting into the sound.

According to a treaty with the federal government, the 20 tribes the commission represents have rights to half the salmon and shellfish in eastern Washington. Coastal indigenous communities eat about 15 times more seafood than the rest of the population, meaning water quality standards that might be safe for people who only occasionally eat fish could still prove dangerous to tribes that eat fish as a core part of their diet. That’s especially true for more isolated indigenous communities, who can’t go to the supermarket and buy frozen chicken if their caught foods prove unsafe.

In 2015, the EPA updated Washington’s water quality standards to bring them back in line with national requirements, after the state government had failed to do so for more than two decades. Before the agency’s intervention, the water only had to have low enough levels of contaminants and pollutants to be safe for people who ate 6.5 grams of fish per day, the equivalent of a single bite of fish a day.

The new standard of 175 grams per day is a big improvement, although it’s likely to face challenges from industry, local governments and the new EPA leadership itself. Either way, the standard is still lower than would be ideal for the native communities. Only about 50 tribes nationwide have the ability to set water quality standards in their lakes and rivers that reflect their greater fish consumption.

Issues ranging from the struggle to adequately protect Washington’s tribal waters to the ongoing battle over the Dakota Access Pipeline at Standing Rock — where the EPA was one of three federal agencies to urge the Army Corps of Engineers to halt the project — illustrate the environmental justice issues that are a crucial part of the agency’s mission. Throughout the country, minority and low-income populations shoulder greater environmental risks.

“One of the underlying reasons for 10,000 Indians coming to Standing Rock was the perception that the pipeline was too dangerous to be put upstream of Bismarck, which is a predominately white capital of the state of North Dakota,” said Grijalva.

However, the agency’s past record on environmental justice is far from perfect. Last year, the independent Commission on Civil Rights sharply criticized the EPA for its slow response to hundreds of claims of environmental discrimination across the past three administrations. But President Trump has shown little interest in even paying lip service to the environmental concerns of tribes — the executive action reauthorizing the Dakota Access Pipeline makes zero reference to Standing Rock, the land defenders, or the native community as a whole.

Mustafa Ali, the head of the EPA’s Environmental Justice office for its entire 24-year existence, resigned on March 8. In a letter to new EPA head Scott Pruitt, Ali argued against the administration’s plans to gut the environmental justice office and other programs intended to help vulnerable communities. As imperfect and insufficient as such help has often been, it has not gone unacknowledged.

“The EPA has been one of the federal organizations that’s been willing to partner and work with the tribes,” said a representative of a federally recognized Alaskan tribal government who spoke on condition of anonymity. “To see that being eliminated, it won’t make the tribes go away. It will just make their work harder.”

For native communities, one issue can compound another. America’s historic mistreatment of tribes mean they start further behind state governments on issues like protecting the environment, and the combination of small populations and widespread poverty means the tax base doesn’t exist to fund efforts to catch up without the EPA’s help. Historically, the government set up reservations in what were often the least desirable lands. But tribal communities want to protect them now, for reasons that go beyond the economics of survival and are tied to a cultural and spiritual connection to that land.

None of the EPA cuts outlined in Trump’s blueprint are official, as only the U.S. Congress can craft the actual budget. But they represent a clear statement of the administration’s priorities, one in line with Trump’s anti-EPA rhetoric on the campaign trail and his appointment of longtime agency opponent Scott Pruitt as its administrator. The precise numbers for the reductions may change, but the EPA is unlikely to avoid severe cuts in the next budget.

Nor does there appear much chance the Trump administration will share the priorities of tribal governments. “Energy independence and building infrastructure is all well and good, but not at the expense of the most vulnerable population,” said Grijalva.

Whatever happens next, tribal communities will likely be left to protect their land and their culture on their own, as ever. “The tribes are going to continue to advocate and protect the land, protect the water, regardless of the funding,” said the representative of the Alaskan tribe. “It’s an ethic. It’s a way of life.”