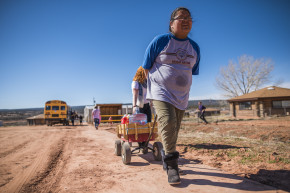 Tainted drinking water makes headlines when it shows up in places like Flint, Michigan, and Trenton, New Jersey, but for many living on the Navajo Nation, in the remote corners of Arizona, Utah, and New Mexico, not having consistent access to clean running water can be the norm.

But, that’s about to change, at least for one Navajo school — the only institution serving special needs students in a place roughly the size of West Virginia, thanks to a non-profit based in Los Angeles that is raising money to build the school a water treatment facility.

The Saint Michael’s Association for Special Education opened its doors more than 40 years ago when Marijane Ryan, a nun who also was a nurse, wanted to help a Navajo boy with polio. The organization developed over the years to serve hundreds of Navajo children with special needs like autism and other severe developmental disabilities. And it’s done so without the luxury of clean, running water.

“There are nearly two million people in the U.S. who don’t have regular access to clean, running water,” McGraw said. “It’s one of the only developed countries to have a population [of people without access to clean water] this size.”

The Navajo Nation is one of those places — of the Nation’s roughly 175,000 residents, McGraw said about 40 percent are without regular access to clean water or a running toilet, a problem he hopes to change.

Earlier this year, a teacher at St. Michaels contacted Dig Deep and explained the school’s water dilemma. On Wednesday, Dig Deep will begin a fundraising effort to raise the estimated $100,000 it will take to build the treatment facility (donations to Dig Deep’s fund for St Michaels can be made here.)

The water coming out of the taps at St. Michaels is not necessarily poisonous — legally speaking, anyway. But it contains unsafe levels of things like lead, arsenic and sulfate, which gives it a dark color and the smell of rotten eggs. While the water technically passes the Environmental Protection Agency’s standards for drinkable water, the odor and appearance creates other problems at a place like St. Michaels, which currently serves about 55 special needs children and adults.

“You and I could get over the smell of the water if we were thirsty enough,” said McGraw. “But a kid with autism might walk into the room and smell that odor and start vomiting.” Cleaning the medical equipment, McGraw said, is an additional problem for the school.

In addition to the treatment facility, McGraw said the group plans to replace much of the aging infrastructure used to deliver water to the school that could be a source of the toxins tainting the water.