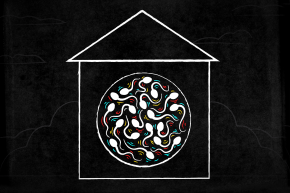 Earlier this week, Puneet Masson, a male fertility specialist in Philadelphia, had a concerned patient come in for a semen analysis. Unlike the usual scenario of a man who makes an appointment after simply trying unsuccessfully for a pregnancy with his partner, this man had taken an at-home, over-the-counter sperm test and gotten discouraging results.

“Over the last year, I’ve seen a lot more patients that have come in because they’ve done one of these things at home and it came back abnormal, and they wanted to know what is going on,” said Masson, who is the director of the male fertility program at the University of Pennsylvania Health System.

That’s because of the emergence of at-home male fertility tests that promise to analyze a man’s sperm quality with close to 100 percent effectiveness as compared to traditional lab testing. Just today, a new study was published in the journal Science Translational Medicine on one such device, which is not yet on the market, and found it has 98 percent accuracy in identifying abnormal semen samples based on sperm concentration and motility. Fertility experts, researchers, and at-home test makers alike say the need for these products arises from male nervousness and shame around traditional sperm testing, which can involve awkwardly masturbating in a clinic. It also feels, for many men, like a referendum on their masculinity — and testing at home can take some of the pressure off.

While most experts seem to agree that the technology in these FDA-cleared devices is largely sound and reliable as a first-step screening tool, some worry that at-home tests might mislead men about their fertility and prevent them from getting a more thorough checkup from a doctor.

There are currently several products with FDA clearance that allow a man to test his own sperm concentration. SpermCheck, for example, involves a man testing his ejaculate with a paper strip that detects specific proteins found in sperm. The device, which is not cheap at $44.99, then reads out like a pregnancy test, with two lines for “normal” and one for “low.” Just this month, a new test, oddly named YO, started shipping for $49.95 in the U.S. A clip attaches to a smartphone camera to record a magnified video of a semen sample and, unlike with the other tests, the accompanying app specifically detects the concentration of motile, or moving, sperm, which are an important factor in fertility.

For two decades, YO’s parent company, Medical Electronic Systems has been a major producer of laboratory semen analyzers that are standard for in-clinic testing and this is the company’s first effort at branching out to the consumer market. The reason for going direct to consumer, as CEO Marcia Deutsch explains, is male anxiety. “It’s very intimidating for a guy to go into a doctor’s office,” she said. “I didn’t understand this as a woman, but guys, this is core thing for them, their fertility potential.”

So much so that when YO first started sending out sample products for men to test, they found that they had to be hounded to actually take the test. “A typical scenario is we’ll send out a kit and the guy says, ‘Oh yeah, I’m gonna use it, I’m gonna use it.’ And then months go by sometimes and I’ll call and say, ‘What’s going on?’ and they’re just embarrassed. They want to know and they don’t want to know.” In trials for FDA clearance, they found a similar phenomenon among their paid participants: Men were nervous about taking the test, even in the context of doing it for a paycheck. “They were terribly relieved when they got a ‘normal’ result,” she said.

Of course, that raises the question of just how game men will be to pay for and try out these at-home tests in the first place — but Deutsch says her product is simply an additional option for men who would have otherwise been too intimidated by going into a clinic.

Urologists often find the same thing. “How fertile you are is almost a cultural way of looking at how you define your manhood,” said Mike Hsieh, a urologist specializing in male fertility at UC San Diego. “If a guy has a very low sperm count, for a lot of people that will trigger them [to think] they’re less of a man. The result does have significant emotional impact.” Masson agrees. “It’s a very sensitive subject to bring up — for some people it reflects part of their masculinity and raises that level of anxiety,” he said. The anxiety is such that Hsieh compares the advent of at-home sperm testing to at-home HIV testing.

There is also just simple nervousness around the practicalities of providing a semen sample at a clinic. “Depending on where you go for your testing it can be also very uncomfortable — ‘am I doing this in the bathroom?'” said Hsieh.

A 1991 study on men’s experiences with sperm testing in Canada and Israel noted the sometimes supreme awkwardness of providing a “sample,” as tubes of ejaculate are so delicately called in the medical profession. The paper describes two clinics in particular where men were given some dirty magazines and directed to restrooms “entirely integrated into the clinics, separated by thin walls through which the next door voices could be heard.” In fact, one study participant “described how the nurse who silenced a vocal colleague only emphasized his exposure.” Add to that the fact that men were expected to produce their samples in a short timeframe so as not to disrupt the clinic’s schedule.

Sometimes, doctors like Hsieh just have men produce their sample at home and then rush it to the lab within the hour or so before it needs to be tested. But that, of course, is just another type of pressure — and, as Masson points out, sometimes when patients don’t get their sample to the lab soon enough, a low count has to verified with a followup in-clinic test to make sure the timing didn’t skew the results.

This might be part of why women tend to more often bear the burden of both fertility testing and treatment, despite the fact that infertility is just as likely to be a male as female problem, according to several urologists who spoke with Vocativ. In fact, Deutsch says that roughly 30 percent of YO’s sales so far have been to women — presumably they are taking responsibility for fertility testing, even when a male partner is undergoing it.

“It just has to do with women also carrying a lot of the burden when it comes to contraception,” said Masson. He says he routinely sees women go through weeks and weeks of fertility testing, while their male partner isn’t once put under the microscope. Then, after a couple months, a male partner will undergo a semen analysis and, as he puts it, “everything halts and there becomes a little bit of a panic.”

This is despite the fact that fertility testing for women is often a much more complicated and involved process, which can include anything from a blood test to daily tracking of basal body temperature to surgically inserting a camera into a woman’s belly.

So, at-home tests just might counter that gender imbalance and empower more men to seek out information about their fertility. “Anything that raises awareness for the responsibility of both partners to do an evaluation for fertility is important,” said Masson. That said, he believes that the at-home results have to be taken with a grain of salt. Masson has found that when patients come in following an abnormal result from an at-home test, the clinic sometimes confirms the test’s finding — but sometimes the patient turns out to have no fertility problems at all.

So, it’s possible for the tests to cause false alarm. And a man who gets an abnormal result on an at-home test might assume that his low sperm count is something he can’t do anything about when, as Masson says, “there are things that are correctable and things that involve a very different kind of strategy.” But those are things only a doctor can advise on.

“They only give you a very incomplete picture of where you are,” said Hsieh of at-home tests. “It’s not just like the home pregnancy test where there’s one line or two lines, you are pregnant or you’re not.” Fertility is much more complicated than that. Even someone with a low sperm count might be able to conceive. As Deutsch puts it, “It takes one sperm cell to fertilize an egg,” she said. “It’s a numbers game — so, the higher number of moving sperm cells, the more potential you have.”

It’s also possible for the at-home tests to give a false sense of security. Masson says these tests fail to capture other issues, like male sexual dysfunction, which might prevent a couple from having sex in the first place — he often finds himself with patients who are more appropriately in need of a sex therapist. Hsieh raises the fact that a fertility test in a clinic can turn up critical health issues, like testicular cancer, that could be missed with at-home testing.

So, Hsieh hopes these at-home tests, and the surrounding marketing for them, will do for conversations around male fertility what Viagra did for awareness about erectile dysfunction — but he’s also concerned about the message they send about seeking professional medical help. “While these tests are good and convenient, we worry that these guys end up not seeing a doctor because of the test, because they say, ‘My CVS test says I’m good,'” he said. “We hope the message isn’t ‘the test says I’m fine, so I don’t need to see a doctor for the next ten years.’”