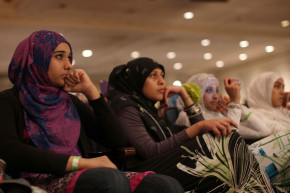 Alleged hate crimes against those in the Muslim community have come to dominate headlines since Donald Trump was elected president in November. A man was charged with a hate crime in January for attacking a Muslim airline employee at John F. Kennedy International Airport. Just a day after Trump was elected, a man allegedly choked a Muslim student at San Jose State University after he pulled at the hijab on her head. But some Americans have harbored anti-Muslim sentiments long before Trump won the election. Anti-Muslim hate groups increased by nearly 200 percent since 2015, according to the Southern Poverty Law Center. But a new report shows that Muslim women bear the brunt of the violence.

Almost one in five Muslim women said their stress and anxiety is significant enough to believe they need to see a mental health professional after the 2016 elections, compared with one in ten Muslim men, according to the Institute for Social Policy and Understanding, a non-profit that conducts research on Muslim-American issues. Forty-seven percent of Muslim women said they are more likely to feel fearful of their safety from white supremacists, compared to 31 percent of men.

ISPU survey included multiple aspects of life for Muslim Americans and how they’ve been affected in 2017 since Trump took office. Muslims have been a central target of many of the Trump administration’s policies, but data that systematically tracks the differences within age, gender, and social class of this population is lacking, the researchers wrote. Nearly 2,400 respondents, including American Jews, Catholics, Protestants and non-affiliated Americans as well as 800 Muslims, participated in the poll, which was conducted between January 4 and January 23.

Despite the clear negative consequences of the Trump presidency, “it is equally evident that many American Muslims have responded to this distress with resilience and resistance,” the researchers wrote. Muslim women were more likely than Muslim men to donate to organizations, 29 percent as opposed to 19 percent. They were also twice as likely as Muslim men to sign up for a self-defense course.