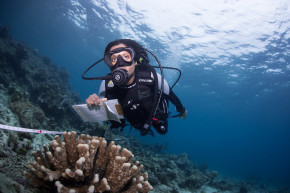 The downloadable template is being deployed to record coral bleaching events

Warmer waters in the world’s oceans are causing coral reefs — most notably Australia’s Great Barrier Reef — to experiencing bleaching in record numbers. As scientists rush to document these events, a conservation group has created a crowdsourcing tool so that more people can help collect crucial data instrumental to protecting these valuable ecosystems.

The New York-based Wildlife Conservation Society has deployed a “rapid-assessment downloadable template” aimed at allowing scientists and independent observers to record the destruction of coral reefs in a uniform way and share data that’s needed to better comprehend bleaching. This method of surveying reefs was first designed by conservationists in 1998 in response to one of the first strongest bleaching events. Later, in 2005 and 2010, it was deployed by scientists working in the Western Indian Ocean. But in 2016, after the National Oceanic and Atmospheric Administration (NOAA) announced the world’s third-ever global coral bleaching event, the template methodology was adopted on a wider scale.

“It was really in 2016 when the third global bleaching event was announced that we knew we needed to do something coordinated and strategic, and so we took that method that had been developed in the Western Indian Ocean and shared it with our colleagues and programs,” WCS Associate Conservation Scientist Emily Darling told Vocativ on Monday. “Being able to use a common and shared methodology, we’re able to aggregate information a lot faster and turn it around to make decisions.”

Using the template, scientists and citizen scientists ideally should record observations of coral bleaching a couple of weeks following peak summer water temperatures. They should also take note of the date, the name of the site, the coral reef location, and record information about how much bleaching has taken place. “For those familiar with coral genera, the bleaching of each colony is scaled by the intensity of the bleaching in haphazardly selected fields of vision,” WCS said in a release. “For those who cannot identify corals, there is a simpler method that allows participation by scaling how white corals has become.”

Austin Humphries, a professor at the University of Rhode Island’s Coastal Institute, said that the template method is both important and innovative because it enables many different people to tackle one of the most pressing issues in ocean conservation today.

“The implications for such a method can be profound for better understanding how climate change is impacting our ocean ecosystems,” he told Vocativ in an email Tuesday. “Ultimately, this method can lead to data-driven management solutions that consider how corals may react to climate change impacts. Such management is important not only for conservation of coral reef ecosystems, but also to the millions of people globally who depend on reefs for subsistence and livelihood.”

Over the last year, Darling said that those involved have been able to curate over 300 surveys that look at more than 70,000 coral colonies and 80 different coral types. Scientists have come to the conclusion that of those coral colonies surveyed, 56 percent were bleached during peak temperatures in 2016. However, Darling explained that that figure doesn’t represent uniform bleaching across the world. After all, the Great Barrier Reef experienced its worst bleaching on record last year.

“There’s incredible variability: so within different countries, across different sites, some reefs are bleaching less than we expect, others are bleaching more. Similarly with coral species: some are more vulnerable than we would have expected, and others are less vulnerable,” Darling said, adding that bleaching isn’t a death sentence for coral, but rather a sign of extreme stress. “And so really trying to understand that variation is an incredibly important part of figuring out what will survive climate change — or at least what has the best chance of surviving climate change.”

But ultimately, the more people that can record information about coral bleaching the better.

“The more eyes and ears we have assessing coral reefs the more we can learn about how to save them,” WCS Senior Conservation Zoologist Tim McClanahan said in a statement released Tuesday. “We are learning that bleaching is widespread and affects many species, but that there are also species and reefs that can persist if other human disturbances do not overwhelm them. We hope a larger community of caring and knowledgeable people will take up this rapid response to help save the Earth’s most beautiful ecosystem.”